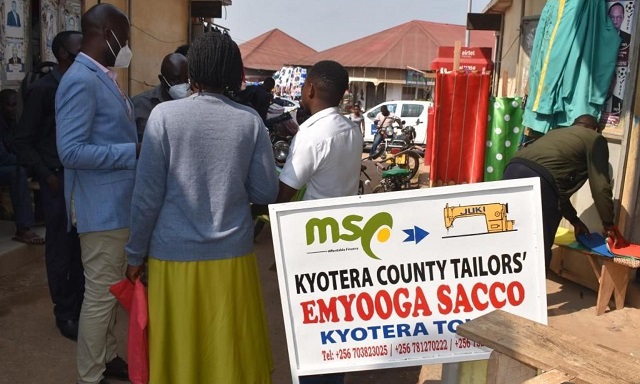 Members of Parliament from Kyotera district have queried the criteria used to spend more than one billion Shillings under Emyooga, a presidential initiative aimed at wealth and job creation.

The scheme was launched in 2019 to enhance the entrepreneurial capacity of selected enterprises and groups through sensitization, skilling and tooling as well as access to specialized financial services.

But Kyotera County MP John Paul Mpalanyi says that the SACCOs in Kyotera were not duly registered. He says that many of the irregularities stem from the unexplained dismissal of the District Commercial Officer Matia Kisekulo, who was the senior technical person meant to scrutinize and recommend the SACCOs to the Ministry of Trade and Commerce to be fully registered before they receive the funds.

Mpalanyi adds that the District Commercial Officer did not officially hand over the office yet his junior Frank Xavier Mbajjo had no guidelines on how to manage the scheme. According to Mpalanyi, the Saccos were recommended without due diligence and as a result, even the members of the associations that received the funds have not benefited from the scheme.

Kyotera Woman MP Fortunate Rose Nantongo explains that most of the associations and Saccos to which they subscribe do not have a uniform venture which affects the actual essence of the Emyooga scheme. She adds that they intend to question different village chairpersons to establish whether they took a step to know the people who are registered in the associations before money was released.

Kakuuto County MP Geoffrey Lutaaya says that several Saccos and associations do not have operational offices and known addresses which is one of the conditions for the Microfinance Support Centre to consider the Saccos for the funds.

Agnes Namusiitwa, the District Secretary for Finance says that wrong people formed associations and registered them to tap into the funds, drawing the intervention of the local leaders who followed the matter and arrested the perpetrators.

Kyotera District Chairman Patrick Kintu Kisekulo says that several Saccos that received the money have not more than eight people, far less than the acceptable number to qualify for the scheme.

He noted that the Chief Administrative Officer was left out of the scheme, and instead, the Resident District Commissioner recommended the Saccos to get the money because there are no formal guidelines to harmonise the distribution of the funds.

In Kalisizo town council, several cooperatives did not receive the money despite applying for the funds. Aloysius Ssentongo who operates a chapati stall told URN that they were mobilised into a group of more than 20 people doing the same business and also attended several meetings but their association was not considered.

However, Frank Xavier Mbajjo, the District Commercial officer and Focal person for the Emyooga program says that people are benefiting from the scheme except for some challenges which are inevitable.

He says that most of the associations or Saccos which were not considered applied late.