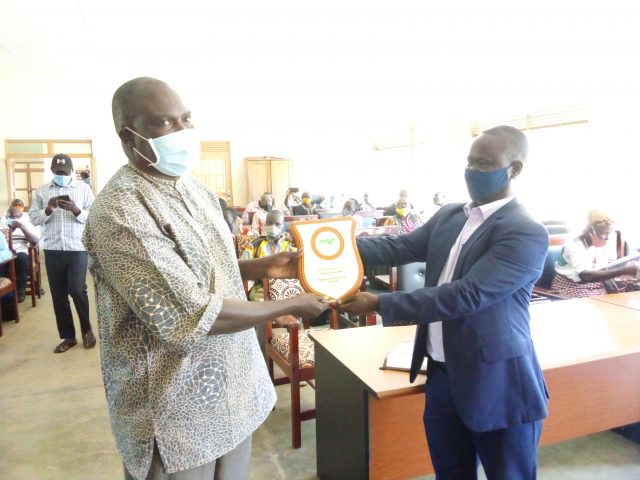 At least Uganda shillings 90 Million meant for Emyooga Program in Serere has gone to the Hands of the wrong beneficiaries, The Tower Post has exclusively established.

The Finance Ministry initially allocated UGX 140 billion seed capital to support youth and women entrepreneurs under the programme, and government has now finalized its allocation to the entire program in the amount of UGX 260 billion.

The program is meant to benefits 18 categories of people including; Boda-Bodas, Drivers, Saloon Operators, farmers, artists, Journalists, local leaders among others.

This website has however exclusively learnt that the district last year hurriedly allocated 90 Million Uganda shillings to non-journalists.

Out of over 200 registered SACCO beneficiaries less than a quarter are Journalists.

John Moses Etiu (Non-journalist) the secretary Pingire County Journalists SACCO during an interview with The Tower Post acknowledged that most members who registered as Journalists are not Journalists and haven’t worked with any media outlet.

He said, the SACCO Members in Pingire County have never attended any formal media institution.

“Members in my SACCO are not Journalists. We only used that as a tool to benefit from Government,” Etiu acknowledged.

He further added that “Including me am not a Journalists.”

And when further probed he admitted having led a group of masqueraders to benefit from Emyooga funds.

“Yes, we have masqueraded as Journalists and we are not professional journalists nor citizen Journalists,” he said before bursting into laughter.

In Pingire County, a total of 43 masqueraders have gotten access to Uganda shillings 30 Million.

Patrick Odongo the Chairperson Kasilo County Journalists SACCO and former staff of Voice of Serere Radio also acknowledged that in his group there are big numbers of beneficiaries who are not Journalists.

He said that out of the 17 registered beneficiaries, only 5 are media practitioners while others are ardent radio callers and agents.

“It’s true, most of our members are not Journalists. Some are just radio callers and agents,” Noted Opolot.

Serere District has less than 50 professional journalists who most of them practice their Journalism in Soroti City and other major towns in Uganda.

Samson Adongu of Serere County Journalists SACCO and Journalist working with Voice of Teso radio, has however blamed the mess on District Technocrats and State Minister for Microfinance Haruna Kusolo whom he says are partly to blame for the mess.

He said that during an induction at Soroti University the Minister categorized Radio callers and agents to be part of the Journalists which to him wasn’t proper.

“My colleague you were around that day when the minister clearly told us that even radio callers are Journalists, why are you probing me that much,” Adongu said.

Serere District has three Journalists SACCO’s whom each recieved a total of 30,000,000/=.

Hellen Adoa Abeku the Fisheries State Minister who doubles as the Serere District Woman MP when contacted expressed her dismay with the district technocrats whom she blamed for disbursing funds to wrong beneficiaries.

“It’s unfortunate to learn that the district went ahead to disburse money to wrong members without verification. The Money has gone into wrong hands. How can a small constituency of Pingire have 43 Journalists? It’s a laughable matter but needs further probing” Minister Adoa said.

Fred Opolot the Pingire County Member of Parliament also confirmed that a majority of Emyooga beneficiaries are not Journalists but are rather radio callers and agents.

While not pushing a blame to the masquerading group of beneficiaries, Opolot said that the group deserve to benefit because they sacrifice their time to listen and call various radio stations in the region.

But, Simon Peter Opolot the Serere District Commercial Officer attributed the error to Microfinance Support Center who he says misguided the technocrats.

“That’s the problem of Microfinance Support Center not the district,” said Opolot

Efforts for a comment from the Minister in charge of Microfinance Mr. Haruna Kusolo by the time of compiling this report went futile as his known numbers went unanswered.