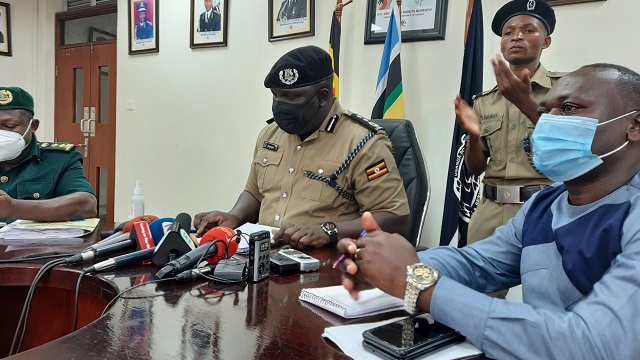 The Criminal Investigations Directorate has raised concern over the increasing cases of Ugandans hiring victims of transnational trafficking as domestic workers.

Charles Twine, the spokesperson of the directorate says that security forces are launching operations against traffickers, and that any person who has hired victims of transnational trafficking as domestic workers will not be spared. He cited trafficking incidents of Burundian nationals to Uganda, and Ugandans who are trafficked to Kenya.

Twine was addressing a briefing, jointly with Agnes Igoye, the Deputy Coordinator of the Anti-Human Trafficking Department in the Ministry of Internal Affairs. Igoye and Twine who have been following up on separate transnational trafficking incidents say Uganda has increasingly become a transit route for majorly girls and women trafficked from Burundi.

A number of women have been trafficked from Burundi on the promise of taking them for jobs in the Arab world but end up being held incommunicado in the areas of Kabalagala, Kansanga, Bweyogerere, Kyengera and Kireka, all on the outskirts of Kampala.

“The key trends have been the issue of citizens of Burundi especially women trafficked in the pretext of getting them jobs in Saudi Arabia. The recruitment is usually done on a promise to take them to Saudi Arabia for work. They end up taking them to Kenya. We shall arrest whoever transports them, keeps them or hires these victims of transnational trafficking as domestic workers,” Igoye warns.

So far, some of the members of the racket of traffickers identified as Charles Kamuli and one Ramsey, have been arrested. Twine explains that traffickers have caused problems for several people who have ended up being arrested in other countries, charged and convicted on crimes they have no idea about.

Twine names some of the people who have fallen victims of transnational traffickers and ended up in cells of Kenya as Rashida Kabubi, Kamada Ssengendo, Sadat Lukyamuzi, Josephine Nadyofe, Florence Nanyonga, Zaina Namilimu, Susan Birungi and Lydia Semyalo.

“We need to work together to end human trafficking. People were arrested, charged and jailed for forging documents and stamps in Kenya yet they were also victims of trafficking. The good news is that we have arrested Charles Kamuli one of the traffickers,” Twine said.

Ronnie Mukundane, the spokesperson of Uganda Association of External Recruitment Agencies (UAERA), calls upon the police to intensify operations against transnational traffickers. He adds that none of the UAERA members has a branch in any of the neighbouring countries since the government only clears Ugandans to go for external employment.

“The government doesn’t clear a person who is not a Ugandan and our companies cannot engage in that. They could be taking them for sexual exploitation. All people who travel through licensed companies have been cleared by the government. By the time you are cleared, the government takes full responsibility,” Mukundane said.