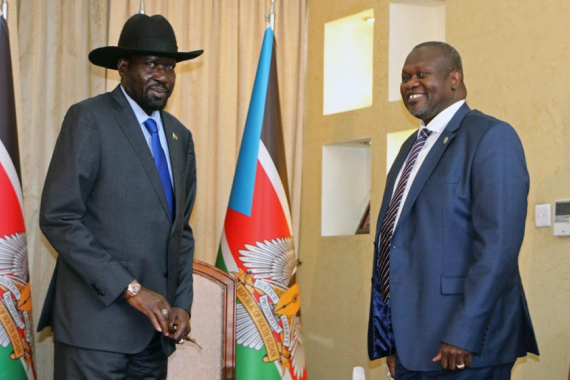 The Jieng (Dinka) Council of elders, a group allied to President Salva Kiir, has backed calls for the South Sudanese leader and First Vice President Riek Machar to relinquish power.

The group, in a statement released on Thursday, said they are in comformity with recommendations of the national dialogue which called on Kiir and Machar to step aside from the country’s political affairs.

“We applaud the national dialogue for pointing out the truth and for sharply dissecting and pointing out state and leadership failure as the root causes of the current crises in South Sudan. We are in agreement entirely with their assessment and call upon president Salva Kiir and the 1st vice president Dr. Riek Machar to listen to the voices of the people”, partly reads the statement.

Observers are keen to attribute the cause to declining influence in the decision-making process after the signing of the 2018 revitalized peace agreement.

The group used to hold regular meetings with the president, members of his cabinet and security personal before, during and after the eruption of conflict in 2013 and 2016.

The group was founded in 2014 with Justice Ambrose Riiny Thiik as the founding leader with Joshua Dau Diu as the founding co-chair of the group. Every section of the Jieng (Dinka) was either represented by an elder political figure or a traditional leader closely associated with the Internal Bureau of the National Security Services or people with close relations to Kiir.

Unconfirmed reports say the group could have split along regional and sectional lines.