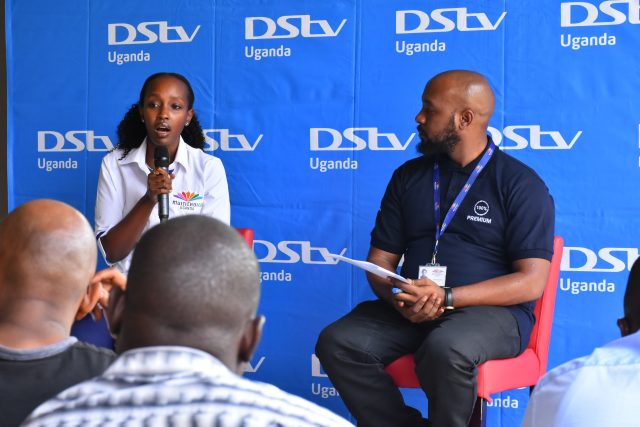 The home of great Pay TV entertainment, MultiChoice Uganda,made this statementat a press conference at their main offices in Kololo.

Joan Semanda Kizza, the PR and Communications Manager, MultiChoice Uganda said, “The announcing of this commissioned content on Maisha Magic Movies Channel is a bold step towards uplifting local content, supporting Ugandan talent, and telling the stories that inspire us, lift the mood,and provide educational benefits to the viewers. The channel is set to premiere movies that the audiences will resonate withthrough their authenticity and relevance to what it means to be Ugandan.”

“As the entertainment industry keeps evolving, the viewer’s tastes and consumption preferences change too, therefore, we ought to keep offering different genres of our own indigenous stories to meet their needs. The number of movies and drama series that are being released by Ugandan producers are increasing, and as a platform for most of the widely watched channels across Africa, it is keen for us to promote our very own, hence our announcement today,” Joan emphasized.

The DStv Channel 141 was launched in July last year as a unique offering inspired by and targeted primarily at the Ugandan, Kenyan and Tanzanian market.

“Weare excited about the highly anticipated and exciting change and extremely pleased to expand the channel to the DStv Access package. As Africa’s most loved storyteller, Maisha Magic Movies will continue to further entrench itself in the market and be accessible in most households. We work tirelessly with content creators to bring premium authentic movies featuring our own local stars, made by our own top talent, both known and upcoming and this is just the final step in ensuring that the hard work becomes accessible to everyone” said Barbara Kambogi, Channel Head.

In his remarks, Colin Asiimwe, the Head of Marketing at MultiChoice Uganda commended Ugandan Film Creators for their thriving spirit in churning out captivating content.

“As we enter into the Uganda Film Festival season, I believe this rebrand to showcase more local content will create interest of the viewers towards the Uganda Film Industry, and as we embark on training the younger generation in this industry, we need to have deliberate efforts that will push viewership so that the industry can grow,” he said.

Some of the Ugandan Movies to watch out for on the channel include; Namuddu, Pieces of Me, Dead Respect, Rakai, Chwezi Dynasty, The Virgin, My Sister’s Keeper, 24 Hours, Influensa, Blood Ransom, The Guest Wife, Atonement, The First Eleven, Contention, Mukisa, amongst others.

An orphaned girl fights against all odds to claim her land inheritance from her wicked stepmother. (Drama, Uganda)

A desperate mother has to free her son, who has been kidnapped by a man obsessed with her. (Drama/Thriller, Uganda)

After a public scandal, a washed-up actress escapes the city only to have an accident that leaves her in a rural farm, with no recollection of her famous career. (Drama/Thriller, Uganda)

An ambitious girl from a low-class background claws her way to internet fame. (Dark Comedy, Uganda)

Brian’s near-perfect career and life take a worrying twist when one morning he wakes up to find invisible people talking to him. (Comedy Horror, Uganda)