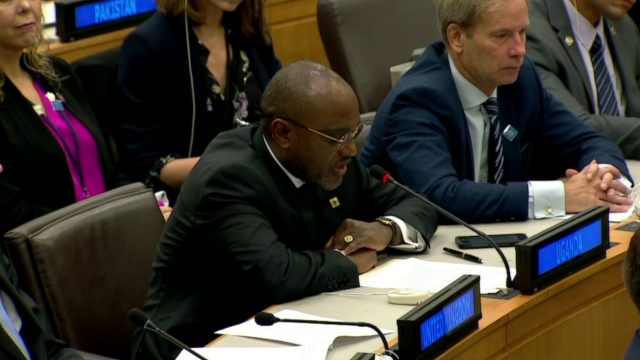 Uganda, South Sudan and 17 other African countries on Wednesday abstained from voting as the UN General Assembly overwhelmingly voted to condemn Russia’s invasion of Ukraine.

In the vote, 141 UN members states out of the 193 passed a resolution to condemn Russia’s aggression against Ukraine in an emergency session signaling further international pressure on Moscow.

The resolution demands that Moscow stop fighting and withdraw its military forces, an action that aims to diplomatically isolate Russia at the world body.

“Uganda Abstained on the UN General Assembly vote on the Ukraine Crisis. As incoming Chair of the Non- aligned Movement (NAM), neutrality is key. Uganda will continue to play a constructive role in the maintenance of peace and security both regionally and globally,” Adonia Ayebare, Uganda’s Ambassador and Permanent Representative of Uganda to the United Nations said.

Eritrea was the only African country that voted against the resolution and four other countries including Belarus, North Korea, Syria, and Russia.

The resolution affirms the sovereignty, independence, and territorial integrity of Ukraine, with UN member states expressing their concern over civilians being targeted in Ukraine.

The United Nations Secretary-General António Guterres said, “The message of the General Assembly is loud and clear. End hostilities in Ukraine now. Silence the guns now. Open the door to dialogue and diplomacy now.”

He called on the world to act quickly, adding that the situation in Ukraine threatens to get much worse and that “the ticking clock is a time bomb.”

On Tuesday, the European Union diplomats in South Sudan urged the government of South Sudan to vote against Russia’s aggression on Ukraine.