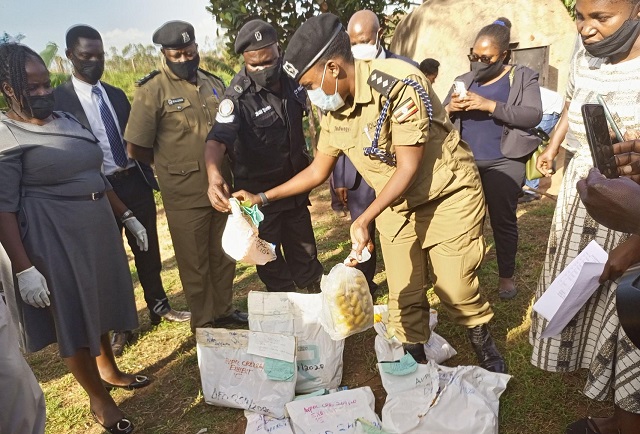 Police have destroyed 145.22kilograms of narcotics worth Shillings 778million. The drugs were destroyed at the Police Drugs Destruction center in Nsambya barracks on Wednesday evening in the presence of the Entebbe Chief Magistrate Juliet Nakitende.

Assistant Commissioner of Police Tinka Zarugaba from the Anti-Narcotic Police department said that all the drugs in question were being smuggled out of the country through Entebbe International airport.

“Uganda remains a transit and a consuming country of narcotic drugs basically for two reasons. We are located in the middle of the cocaine route which comes from South America to Europe and Asia. We are on the Heroine route that comes from Afghanistan heading to America and Europe,” Tinka said.

He explains due to the fertile soils and good climate in Uganda, there is a worrying increase in the number of people growing cannabis in all parts of the country, which may fuel drug addiction.

According to Zarugaba, the latest research conducted by the police anti-narcotics units in collaboration with Makerere University shows that 16% of youths in urban areas are under the influence of drugs, which is disastrous to the country.

Zarugaba says there is a need for everyone to participate in the fight against drug trafficking as its impacts would be irreversible. Goretti Tindiwegyi, the officer in charge of the Criminal Investigations Department at Entebbe Airport Police, wondered why the public keeps accusing the police of stealing exhibits seized at the airport despite their hard work.

On her part, the Entebbe Chief Magistrate Juliet Nakitende who tried 12 cases of drug trafficking, said that the destroyed drugs belonged to suspects who pleaded guilty and were sentenced. She revealed that the majority of suspects were Ugandans who were being used by powerful people to smuggle drugs out of the country. In December 2020, police destroyed 105 kilograms of narcotic drugs worth Shillings 4 billion.