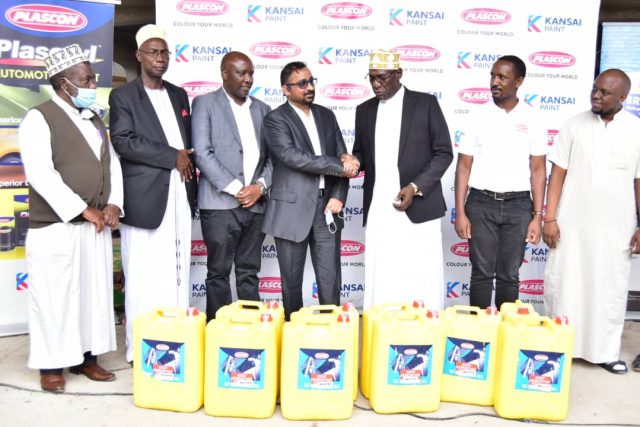 Kansai Plascon, Uganda’s biggest paint company has donated paint towards the construction of Masjid Mbogo, the oldest mosque in Uganda.

The paint was handed over to Muslim leaders by Kansai Plascon Managing Director Santosh Gumte on Friday afternoon at an event held at the mosque’s construction site in Kawempe, Kampala.

“Masjid Mbogo is a very big landmark in the Islamic faith in Uganda. As a company, we thought it right to join hands with the Muslim community in the preservation of the heritage that this historical mosque holds,” Mr. Gumte said.

“We stand in partnership with you by making this humble contribution because we understand the value attached to this mosque which was built in memory of Prince Nuhu Kyabasinga Mbogo, a key leader of the Muslim faith in Uganda,” he added.

Constructed in 1903, the historical mosque located at Kawempe Muslim Primary School had been dilapidated which prompted its management to start construction of a new one. The previous mosque was able to handle a capacity of 400 people but it was too small compared to the masses that flock the place for Juma prayers every Friday.

According to management, the redeveloped mosque is hoped to hold a capacity of about 1,700 people.

Plascon’s donation is one of the many interventions that the paint company has undertaken to assist religious establishments in the country.

Plascon’s contribution to Masjid Mbogo Mosque is not the first time the company has supported community development projects in Uganda.

Over the past 10 years, several establishments including schools, churches, orphanage homes, hospitals and Community based organizations have benefited from Plascon’s CSR drives where they have received donations in form of paint makeovers, and cash among other supplies.

Earlier this month, the company donated UGX 20 million to the Anglican Church of Uganda to help them towards the repayment of the debt it incurred during construction of Church House.