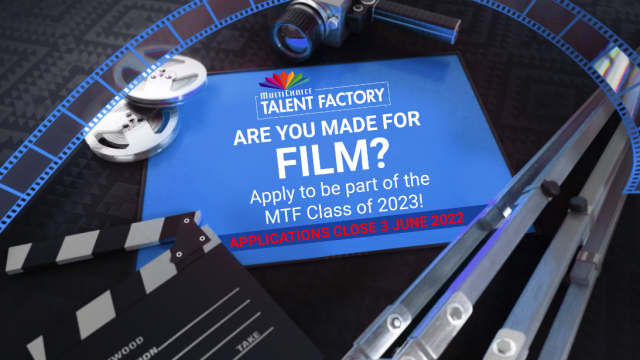 Now approaching its fifth year, the MultiChoice Talent Factory (MTF) Academy has announced a call for applications for its world-class film and TV training programme which kicks off in October this year!

The call is open to all emerging filmmakers with either some industry experience or a relevant post-school qualification, to apply for this exciting opportunity to hone their television and film production skills. Our curriculum combines film studies such as directing, sound design, the business of film, to name a few with workplace experience on M-Net’s top productions.

The 12-month fully-funded programme is open to candidates from Southern, Western and East African countries.

Under the leadership of three new academy directors, this will be a landmark year for the MTF Academy programme.

“There are so many stories on our continent that need to be told and documented with a sense of skill and passion that only a programme such as the MTF Academy can train young people to do. I can’t wait to be a part of this journey,” she adds.

Alongside her expert track record with M-Net through Africa Magic since 2014, Babatunde will lead the Class of 2023 with over 20 years of experience.

East Africa hub Academy Director Victoria Goro will equally lead MTF East Africa’s hub with a film production career spanning 31 years and as one of the most sought-after documentary production experts in Kenya.

“As someone passionate about training and knowledge-sharing, there’s just nothing that can match the level of expertise and practical experience that the Class of 2023 is set to gain. The fact that the MTF programme also results in alumni establishing production companies after graduation thereby thriving in self-employment tells you all you need to know about the success of this programme,” says Goro.

MultiChoice Africa is committed to building and sustaining the training-to-employment pipeline within Africa’s film and TV industry. The MTF initiative also aims for a 60/40 split in favour of women since its inception.

Coming in with 15 years of experience in audio and video production, Southern Africa Academy Director Christopher Puta believes that the growth of Africa’s film and TV industry starts with providing young people with the opportunity to produce quality content.

“By equipping students with what it takes to be world-class film and TV professionals, the MTF Academy programme is effectively raising the next generation of African storytellers and historians.” he says.

In addition to the hands-on training that all students will receive as part of the programme, they will also get enhanced training experience from the Academy partnerships, which include the New York Film Academy (NYFA), the Henley Business School, Dolby and Canon, among others.

Previous cohorts have also worked with the United Nations’ Verified campaign, and have pitched projects to Partners Against Piracy (PAP) and Creative Development on a climate change campaign.

“The continued support from stakeholders, partners and students has been overwhelming, and we couldn’t be more excited to have reached our fifth year as one of the MultiChoice Group’s leading initiatives directly investing in young African filmmakers,” says MTF Director Nwabisa Matyumza.

Think you’ve got what it takes? Then visit https://multichoicetalentfactory.com/ to find out more!

Applications will be open from Monday, 9th May and close on Friday, 3rd June 2022, and have to be completed on https://cte.multichoicetalentfactory.com/  Applications made outside of this website will not be considered.