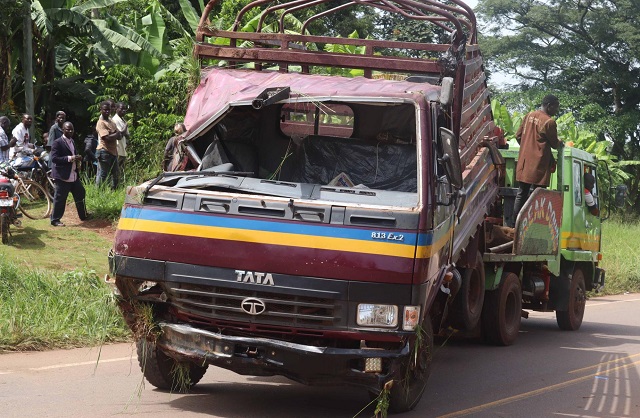 At least five inmates from Butuntumula prison have died on the spot and several others escaped with injuries together with their warders in an accident along the Kampala-Gulu highway. The deceased inmates are Elia Kizito, Mutwalibu Lugoolobi, Innocent Gumisirize, Umar Sentamu, and Ronald Nsubuga.

The accident occurred around 10:00am on Monday in Nalongo village, Luwero district involving a prison truck registration UG 0363U destined for Nakasongola and Toyota Wish registration number UBG 587W heading in the opposite direction.

The prison truck was transporting 54 inmates and 12 prison warders to undisclosed farms. Living Twazagye, the Luwero District Police Commander says that preliminary information from eyewitnesses shows that the accident occurred after the Toyota Wish sustained a tyre burst and lost control before it rammed into the prison truck forcing it to overturn.

Twazagye says that five inmates died on the spot whereas other inmates together with prison warders sustained injuries. He says that police transferred both the injured and the deceased to Luwero hospital.

Twazagye notes that both the prison truck and Toyota Wish vehicle have been towed to Luwero Central Police Station as investigations into the accident continue.

The driver of the Toyota Wish escaped before police arrived at the scene.

Salim Zimula, the area parish councilor has asked the prison authorities to stop transporting inmates on trucks to minimize accidents.

Moses Sentalo, the Deputy Prisons Spokesperson asked for time to compile a report about the accident.