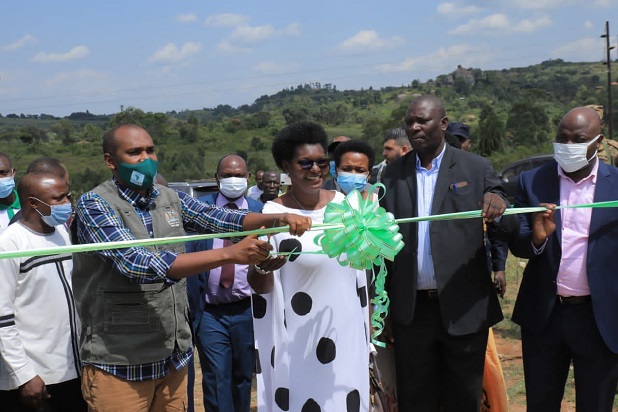 The Minister of Agriculture, Animal Industry and Fisheries Frank Tumwebaze has commissioned and handed over Agricultural equipment worth Shs 29billion to Rwenzori region.

The minister was in the Tooro sub region monitoring the progress of implementation of Government projects during which he commissioned and handed over agricultural equipment to farmers under the Agro-industrialization for Local Economic Development (AGRILED) program.

AGRILED is a Shs100 billion presidential initiative piloted in Rwenzori region to spur economic development in the region through agro- industrialization. Implementation of the programme commenced in financial year 2020/21 when Government released Shs49 billion to NAADS Secretariat, the lead implementer of the programme.

The above equipment is distributed among the 11 beneficiaries Local Governments based on the priorities they submitted to the Ministry of Agriculture.

During the 3-day visit, Hon. Tumwebaze accompanied by State Ministers Hon. Hellen Adoa and Hon. Bright Rwamirama, commissioned some of the AGRILED projects and handed them over to the selected farmer beneficiaries.

Minister Tumwebaze cautioned the beneficiaries of the equipment/facilities to put them to good use and warned that those who will be found misusing or underutilizing them, they will be taken away from them and be given to serious farmers.

The representative of the Executive Director NAADS Ms. Grace Kazigati assured the farmers that implementation of the AGRILED programme is still ongoing and more people in the Rwenzori region are yet to benefit.

Under the same AGRILED programme, Government through NAADS is construction 2 industrial parks in Kasese and Kabarole districts.