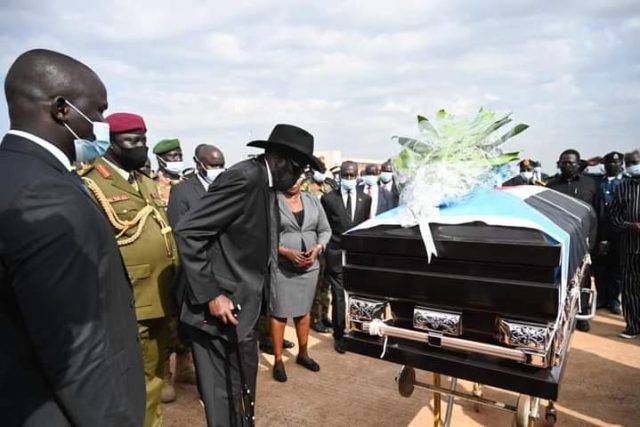 Water Resources and Irrigation Minister Wanawa Peter Gatkuoth was laid to rest this morning at Simba Square in Juba. The burial was attended by President Salva Kiir, as well as many senior political figures.

Manawa, who was appointed during the formation of the revitalized coalition government in March 2020, died of high blood pressure at a hospital in Cairo, Egypt last week at the age of 49.

The late Manawa was the Sudan People Liberation Movement-In Opposition (SPLM-IO) chair of the National Committee for Information and Public Relations. He also served as a member of the SPLM-IO Political Bureau.

His father, the late Peter Gatkuoth, was a prominent politician.

Manawa hailed from the Lou Nuer community in Akobo County of Jonglei State.

President Sava Kiir eulogized Manawa: “We have lost a great man, Manawa Peter, and let us pray to God to rest his soul in eternal peace.”

President added: “I don’t have much to say, but I want to say that let’s pray for late Manawa Peter’s children. I have seen the little children left behind by Manwa; they need care. Whoever comes across them, please give them whatever they may need.”

SPORT Sandrah Nassali - August 14, 2022 0
Vipers have left striker Cesar Manzoki and captain Halid Lwaliwa out of the traveling squad to Rwanda for the preseason clash with Rayon Sports...

Main Story URN - August 14, 2022 0
The National Drug Authority (NDA) has confiscated drugs worth over 150 million Shillings in an enforcement operation carried out on unlicensed outlets in Rubaga...