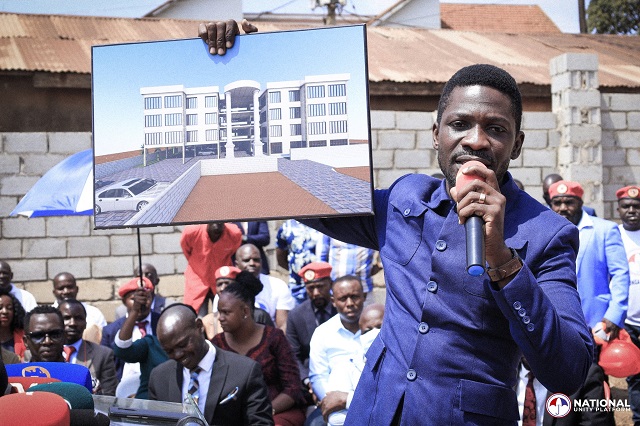 The construction groundbreaking function was held at the new site by the NUP leaders led by Robert Kyagulanyi Ssentamu, divisional councilors, mayors, and members of parliament led by the Leader of Opposition Mathias Mpuuga.

Speaking about the newly acquired site, the party spokesperson Joel Ssenyonyi said that Kamwokya-based office had become too small because NUP has grown massively since its launch.

Without mentioning how much was spent in acquiring the relatively small piece of land, Ssenyonyi said the money was generated from NUP leader’s monthly contributions and the party supporters in the diaspora.

“There are three plots in this place,” Senyonyi said. “We intend to expand it with time, and we’re in that process to expand it to at least 2 hectares. As a political party we mobilized funds from our leaders at different levels, who contribute something on a monthly basis, but also from our people here and abroad.”

Ssenyonyi also noted that they have future plans to acquire more plots of land for the party offices in all the regions, for advancing the struggle of attaining leadership.

David Lewis Rubongoya, the Party General Secretary said their competitors have in the past criticized them for not revealing accountability for funds they collect, but they will keep giving accountability to their public in terms of tangible actions taken.

Rubongoya explains that apart from the land acquired, other funds collected have been used in opening sub-regional offices in different parts of the country and continuing to support over 6000 victims of torture and families of missing persons since January 2021.

On his part, the party president Robert Kyagulanyi said acquiring land in the heart of a ghetto area in Kawempe division was a strategy for not losing their identity of standing for the interests of the common person.

Mathias Mpuuga, said having their party headquarters built should act as an indication of how serious a young political party is and willing to take up Uganda.

“Over the past months, the talk was that NUP was a seasonal whirlwind, and therefore it would go,” Mpuuga observed. “I sense that that is no more. Now they can say these guys are here to stay and we’re now permanent. It is now over 30 years since NRM led this country, but they are still renting. They are not just renting, but the landlord is demanding arrears from them!”