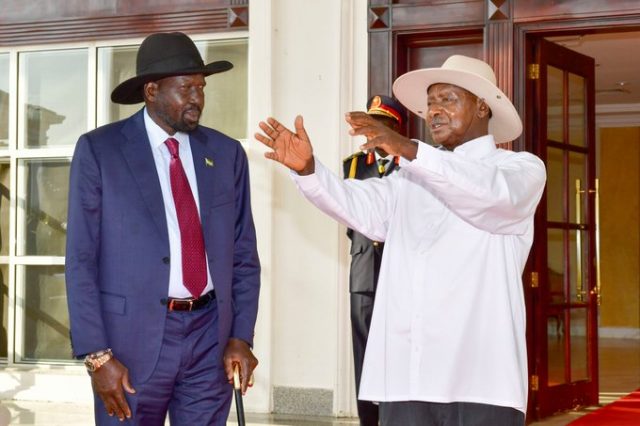 South Sudan President Salva Kiir has invited his Ugandan and Ethiopian counterparts, Yoweri Museveni and Dr. Abiy Ahmed, to attend the graduation ceremony of unified forces, scheduled for next week.

The invitation to Museveni was delivered by South Sudan’s Minister of Presidential Affairs, Dr. Barnaba Marial Benjamin in Kampala Uganda.

The unity government is now optimistic that it will not fail to graduate the first batch of unified forces in the scheduled August 30 date.

Addressing the press upon his return, Dr. Marial said President Museveni assured that the possibility of his attendance is eminence.

“We were able to meet his excellency President Museveni in order to deliver a message from H.E. President Salva Kiir, inviting his excellency to attend the graduation of the unified forces that will take place on the 30th of August 2022 in Juba,” said Marial.

The graduation and deployment of the unified forces has been postponed many times in the last three years, due to what has been termed a lack of political will and insufficient funding among others.

However, the peace parties have apparently hastened the implementation process, after availing a roadmap on the timeline and extending the transitional period by two years.

This week, a joint security mechanism visited the unified officers trained in Rajaf, a training site at the southern suburb of Juba and Gorom training center, 30 miles west of the capital.

In a related development, the Minister of Cabinet Affairs and Minister of Mining also extended the president’s invitation to Ethiopian Prime Minister, Dr. Abiy Ahmed to attend the graduation event.

In June, the Vice President for Infrastructure Cluster, Taban Deng Gai invited the newly elected President of Somalia to attend the graduation ceremony of the unified forces, which was scheduled for that month.

Vice President Gai, who headed a delegation to Mogadishu to attend the swearing-in ceremony of President Hassan Sheikh Mohamud, told the even that his government has made progress in the 2018 peace agreement.

However, the graduation ceremony was postponed unannounced, and without clear reasons.