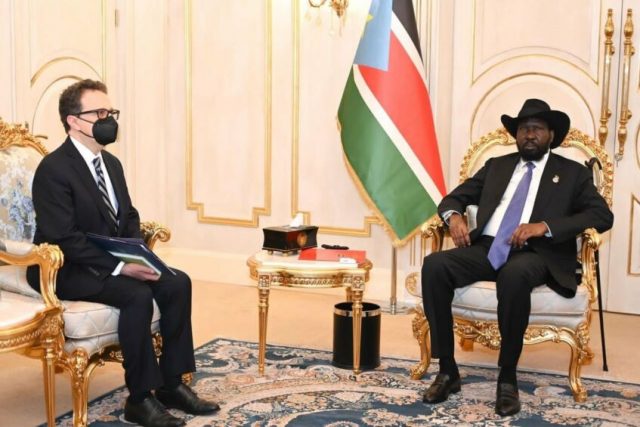 The newly appointed United States Ambassador to South Sudan, Michael J. Adler arrived in the country on Tuesday to assume his diplomatic duties.

Adler, the fourth U.S. Ambassador into the country, succeeds former Ambassador Thomas Hushek, who served from May 2018 until his mission ended in July 2022.

After confirmation by the United States Senate, Ambassador Adler was sworn in on August 10 in Washington, DC.

He arrived in Juba on Tuesday, August 23, and presented his credentials to President Salva Kiir on Wednesday August 24.

According to a Thursday press statement of the Embassy, Adler is a veteran Foreign Service Officer who joined the Department of State in 1992.

He served from 2019-2021 on the White House National Security Council staff as the Deputy Senior Director for South Asia and as Director for Afghanistan.

Prior to that, he previously held multiple diplomatic positions including as Acting Deputy Assistant Secretary for South and Central Asian Affairs, and Director of the Office of Afghanistan Affairs.

He served with the Coalition Provisional Authority in Baghdad and Najaf and at the U.S. Mission to the United Nations in New York.

Before joining the Foreign Service, Adler lived in Nigeria and worked for the U.S. Agency for International Development, including in South Africa.

He has received multiple State Department performance awards, the Secretary of Defense’s Meritorious Civilian Service Award, and the Spanish Order of Civil Merit.