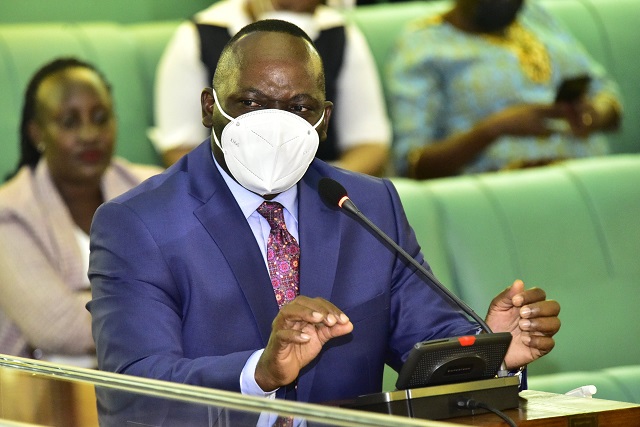 The Leader of the Opposition in Parliament, Mathias Mpuuga, has announced the National Unity Platform-NUP’s decision to shun the forthcoming elections of the East African Legislative Assembly (EALA) representatives, which commence on 19 September 2022 with nominations.

The tenure of the current EALA members ends on 17 December 2022.

Mpuuga during the plenary sitting of Tuesday 30, August 2022, said NUP will not be party to a process he alleged has been turned into a ritual by the ruling party, by fencing six out of nine positions allotted to Uganda.

“For some reason without a formula, the National Resistance Movement (NRM) believes that it is entitled to six members at EALA, and that entitlement is eternal. As if the six are ordained and that others should look at them in admiration,” Mpuuga said.

He castigated NRM for meddling in the nomination of representatives of other political parties, and that it was partly the reason for NUP’s abstinence from the election.

MP Ibrahim Ssemujju cited a scenario in 2012, where Speaker Among, then a member of Forum for Democratic Change (FDC) party, was denied opportunity to participate in EALA elections because of “bad politics by the ruling party”.

“When we selected you to represent FDC in EALA, NRM connived and stopped you from going. It is important that parties and individuals should not be greedy, our colleagues in the Opposition should benefit, the person you victimised is now presiding over you,” said Ssemujju.

He implored the Speaker to fight the vice which he said has persisted, urging her to defend the opposition members interested in the EALA race.

MP Asuman Basalirwa asked Speaker Among to use her court case on EALA to ensure equity in representation.

“The Rt Hon. Speaker successfully petitioned courts of law on matters of equity in the EALA election and the courts gave guidance on how these positions should be equitably shared,” said Basalirwa.

Speaker Among, who chaired the sitting, said the election will be guided by the EAC treaty, adding that her court case mentioned by Basalirwa will also guide the process.

“It is not a ritual – the voters of EALA are in this House, we will follow the law – we are going to elect as per the EAC treaty,” said Among.

“The National Assembly of each partner state shall elect, not from among its members, nine members of the assembly, who shall represent as much as it is feasible, the various political parties represented in the national assembly, shades of opinion, gender and other special interest groups in that Partner State, in accordance with such procedure as the national assembly of each partner state may determine,” reads Article 50 of the EAC treaty, which is applicable to elections.

The Speaker urged all party whips to provide Parliament with the list of their candidates nominated for EALA who will thereafter be vetted by a select committee of Parliament, whose membership will be drawn from all parties represented in Parliament.