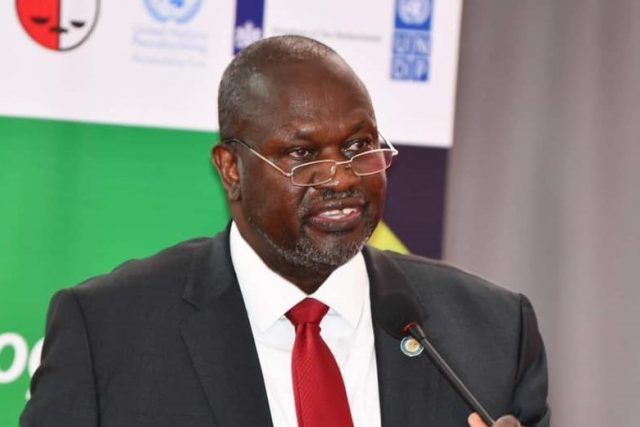 The First Vice President expressed fears that the implementation of the peace agreement during the 24-month extended period might be derailed by a lack of budget.

Dr. Riek Machar called on the Minister of Finance to either withdraw the proposed national budget from the national parliament or reconsider allocating additional funding for peace implementation.

The one-point-three trillion pounds budget approved by the cabinet on the 3rd of June is currently being scrutinized by the national legislature.

By law, the country’s budget implementation begins on July 1st each year, but last month President Salva Kiir withheld this for another three months.

The head of state was cited as saying, the delay was to enable the Ministry of Finance to meet previous essential government obligations including salaries, operations cost, peace-related matters as well as Covid-19 interventions.

According to Dr. Machar, the allocation made for implementation of the pending tasks of the 2018 peace accord is adequate.

Addressing the mourners at the funeral prayer for the late Manawa Peter Gatkuoth, Machar warned that failure to increase the budget will derail the two-year extension of the transitional period.

“If the resources are not there, then the 24 months will be wasted but once the resources are provided then the major challenge after the security arrangements would have been resolved the national legislature has a role in this,” said Dr. Machar.

Machar says he raised the issue with the Minister of Finance, Dier Tong and asked him to reconsider the allocation.

unified forces during a graduation rehearsal at the Dr. John Garang Mausoleum yesterday.

“The current budget which has been discussed in the National Legislature has a very small companion of peace budget,” said Machar.

“In the consultation we had with the Ministry of Finance, he had an option to withdraw the budget or to give a supplementary budget so that the road map can be factored in.”

It’s not clear how much has been set aside for activities of the peace agreement.