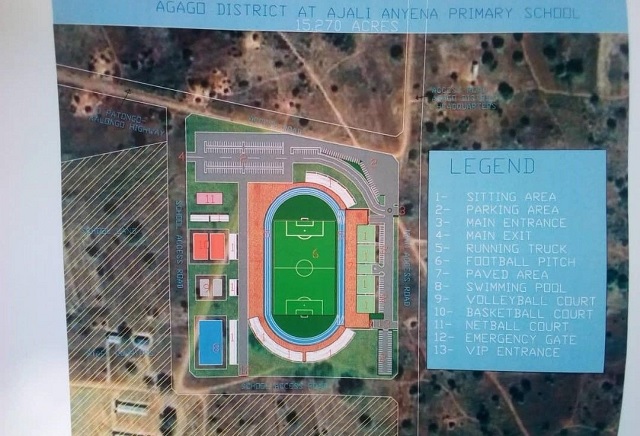 The development followed a 2018 council resolution that a stadium to nurture the sports talents in the district be constructed. They decided to name the proposed stadium after Gen. Lokech to honor him, saying he was a peace-loving person.

In June, the physical planner revealed that the first phase of the project was completed. It involved clearing the bush around the stadium, uprooting trees, leveling the pitch, and planting grass on the stadium, all at a tune of 20 million shillings.

In June, the district council during the approval of the 2022/2023 budget draft, approved 38 Million Shillings for the second phase of the construction.

Leonard Ojok, the chairperson of Agago district told Uganda Radio Network in an interview that the second phase will start in the second quarter when they receive the 38 million shillings budgeted for. The second phase of the project will involve working on the football pitch, running track, and fencing.

Ojok said the district has contracted an architect to draw the artistic impression of the stadium and draw the overall budget for the construction project.

Andrew Akera, the Physical Planner of Agago district said they are finalizing work on the budget for the entire project, which he said will be in billions of shillings.

Akera reiterated that it is possible the stadium can be opened in December so that it is used as a campaign tool to get sponsors on board to support so that the construction can be completed. He made it clear that the district alone cannot fund the project.

According to the plan, once completed, the stadium will have a parking yard for at least 100 vehicles, a pavilion, a football pitch, a running track, basketball and volleyball courts, a swimming pool, and a monument of Lt. Gen. Lokech among others.

Lt. Lokech, a senior military officer at the rank of Lieutenant General and Deputy Inspector General of Police of Uganda died in August 2021.