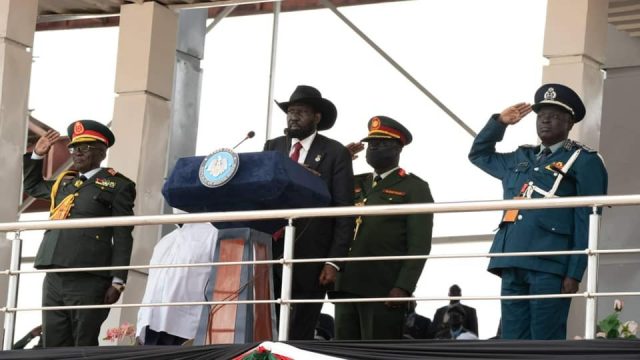 The first batch of South Sudan’s unified forces officially graduated on Tuesday, a critical step in the implementation of the security arrangements under the 2018 peace agreement.

The graduation ceremony was held at the Dr. John Garang Mausoleum in Juba.

Speaking during the graduation ceremony, President Salva Kiir called on the forces not to pay allegiance to any other leaders but to the country and the commander-in-chief.

“From today, you are not a military wing of any party to the conflict. You are now the first national security sector organ of the Republic of South Sudan,” Kiir said.

The South Sudanese leader further said that the implementation of the security arrangement had been one of the most challenging tasks since the signing of the peace agreement in 2018.

According to the 2018 revitalized peace deal, South Sudan is supposed to train and graduate a unified force of 83,000 personnel to take charge of security during the transitional period until 2023, when elections are held.

Kiir reiterated his commitment not to drag the country to war again. “As I have been saying, I will never take our people back to war, and I must tell you that you are not being graduated to take you back to war,” he said.

President Salva Kiir called on the new troops and other forces to refrain from political and ethnic divisions after they successfully completed basic training. “Now you belong to the South Sudanese people,” Kiir said.

The ceremony was attended by Yoweri Museveni, President of Uganda, Abdel Fattah al-Burhan, President of the Sovereign Council of Sudan, and representatives from the region and the international community.