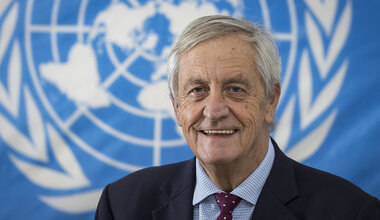 While speaking at the pass-out ceremony, he said it was a pleasure and a privilege to witness the occasion of the graduation of the first batch of the Necessary Unified Forces.

“The United Nations congratulates the parties and the Transitional Government for giving life to this commitment to creating a single national defense apparatus under civilian government authority,” he said. “This first graduation is a long-awaited day in this country’s pathway to peace. A unified defense force is one of the most visible and meaningful expressions of national unity, especially in societies emerging from conflict.”

“Its establishment will, on account of its inclusivity and diverse representation, symbolize the national identity of South Sudan, not a partial or regional or tribal mechanism,” he added.

Haysom said the Necessary Unified Forces will not merely be an important symbol but an active contributor to national peace.

“The implementation of transitional security arrangements is a cornerstone upon which further meaningful steps can now be taken including a broader security sector transformation process, nation building, and sustainable development,” he said. “The capacity of the Transitional Government to protect its own citizens, display South Sudan’s respect for International Humanitarian Law, and guarantee the territorial integrity of South Sudan, will all be strengthened.”

The UN chief said the graduation of the Necessary Unified Forces is an initial step in a complex but essential process of constructing a national army and other organized forces.

“It will require, as you are aware, a continued commitment by the Transitional Government to fund, deploy, and sustain these forces over time,” he said. “Importantly, we expect that the National Unified Forces will play a critical role in meeting the security and logistical needs for legitimate and credible elections, as provided for in the Peace Agreement. In this way, the National Unified Forces will also play a critical role in building democracy.”

“The most urgent challenge before the Transitional Government is in breaking the cycles of violence and conflict that have spread from north to south and east to west through the country,” he added.

According to Haysom, the graduation opens the possibility of effective deployment to curtail subnational and inter-communal violence.

“Since the signing of the Revitalized Agreement, the UN has provided support at various stages of implementing the transitional security arrangements: training, technical support, and logistical support,” he said. “We will continue to offer support, including capacity-building of the police and other forces, and advising on the technicalities of security sector reform and a broader DDR process.”

He said, together with the government, the UN had taken a particular interest in the potential of the Unified Wildlife Services, an armed force that yet supports the creation of tourism-related livelihoods, physical infrastructure, and the protection of the people of South Sudan’s natural resources.

“I urge the parties and the government to build on the consensus and momentum created in the last few months, so as to progress the critical benchmarks of the peace process,” he said. “As ever, the UN stands ready to support the Government and people of South Sudan. We will do so with IGAD, R-JMEC, the African Union, and the international community. It is in this spirit that I renew the full commitment of the UN to support the implementation of the Peace Agreement.”