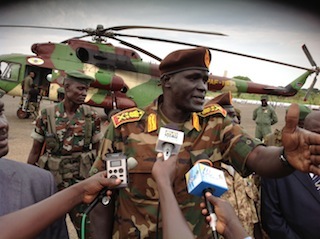 The Kit-Gwang faction led by General Johnson Olony has denied allegations that its forces carried out an attack on Fangak County, Jonglei State in which eight civilians were reportedly killed.

Biel Boutros said as a result, five women, two children and another man were killed in the incident.

Bourtos said the attack forced hundreds of civilians to flee to the neighboring Upper Nile state.

Reacting to the accusation, the armed opposition group dismissed the claims, saying its forces have only put up a defensive position in Tonga, Upper Nile State.

“The accusation by the commissioner of Fangak is not true, because our forces since were attacked on date 17TH July this year in Panyikang by forces of Gatwech and it groups on date 15TH August,” Major General Maurice Samuel, the group’s spokesperson told Eye Radio.

Meanwhile, on 20th August, the group’s leader General Johnson Olony confirmed that he repulsed a coordinated attack on his forces to Diel of Fangak County and captured the area.

Olony said his troops were attacked by the forces of Gen. Simon Gadwech, the SPLA-IO under Dr. Riek Machar, and those under Dr. Lam Akol, in Upper Nile State.

“Then we said okay, if they are attacking us, let’s go and fight them, we went to Diel and fought them and we captured it and entered Fanjak yesterday,” Olony told Eye Radio last month.

However, General Maurice, who is based in Juba, said since the last fight two week ago, the Agwelek forces have not moved out of their area.

“Our forces were on the position of defense without moving anywhere or target civilians. The statement of the commissioner is not true and its allegation is aimed to create confusion in the area.”

“Therefore we want to assure the public that our forces are in Tonga under the leadership of General Paromi Angui and they are in the position of defense and did not move to any place and there now in the Tonga area.”