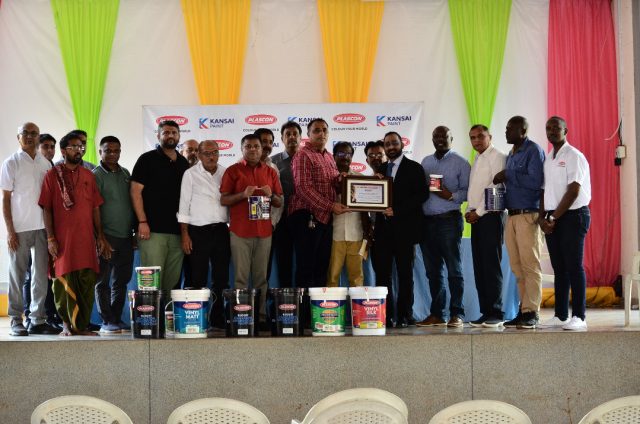 Kansai Plascon, Uganda’s biggest paint manufacturer has donated paint worth Shs 50 million towards the renovation of the Shree Hindu Sabha – Shree Satyanarayan Temple, one of the oldest Hindu Temples in the country.  Inaugurated in 1955, the temple which is located in Jinja City is a big historical landmark in the country which is always hosting prayers for the Hindu community and is also a destination of interest to tourists both domestic and foreign.

The paint donation was delivered to the Hindu community in Jinja by the Plascon Managing Director Santosh Gumte and handed over to them at an event held Friday morning at the temple.  “The Shree Satyanarayan Temple is a great landmark for the Hindu faith in Uganda and for the country as a whole. When we heard about the renovation plans, as a company, we felt that we had to take part in the preservation of the heritage that this temple holds,” Mr. Gumte said.

“We have enjoyed great moments with Hindu communities in the past like the Holi festival, celebration of the India Day, and we continue to stand with you by making this humble contribution towards the renovation of Shree Satyanarayan Temple because we understand how valuable and significant it is,” he added.

Mr. Gumte pledged to continue supporting the Hindu Community in other development projects that they be undertaking saying that; “religious institutions play a big part in community bonding and transformation and therefore need to be supported all the time.”  The temple provides charity to vulnerable people including orphans, street children and widows within Jinja City and as a tourist site is visited by more than 20,000 people annually.

This was the second donation Plascon made to a religious institution in a space of one week. On Tuesday, the paint manufacturers handed over paint worth Shs 30 million to the Catholic Church in Kampala to assist them in renovation and construction projects at the Uganda Martyrs Hospital, Rubaga.

Earlier in March, they made a Shs 20million cash contribution to the Anglican Church of Uganda to assist them in clearing the debts accrued during the construction of Church House.