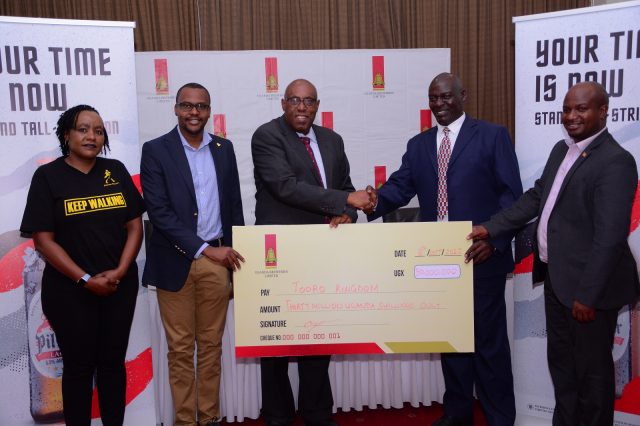 Uganda Breweries Limited through the Pilsner Lager brand has boosted the 200th Anniversary of Tooro Kingdom with a 30 Million contribution geared towards facilitating the coronation activities to take place on 12th September and the pre coronation concert (Kasiki) usually a curtain raiser event for the Empango celebrations.  These celebrations are held annually to commemorate the anniversary of the coronation of the Omukama of Tooro, His Majesty King Dr. Oyo Nyimba Kabamba Iguru Rukidi IV.

Speaking at the handover, the Board Chairman of Uganda Breweries Mr. Japheth Katto said that much like Tooro Kingdom, Uganda Breweries, the oldest brewery in Uganda has enjoyed a rich heritage and history due to the passion that Ugandans have in upholding great cultural and heritage institutions. “200 years of Tooro Kingdom is indeed a showcase of the rich cultural heritage and resilience of the people of Tooro. It shows the people’s zeal in protecting and upholding this great institution and that kind of strength in character resonates with us as Uganda Breweries and with Pilsner Lager, commonly known as the King’s Beer.”

The donation was received by Hon. Peter Sunday Rusoke, the Minister of Culture of Tooro Kingdom who led a delegation from the kingdom. “In our 200 year existence, we have relied on the good will of first our people and then, stakeholders from outside the kingdom to support us to continue doing the good work that we do in growing our communities through various activities. We are happy that Uganda Breweries has remained a consistent partner, supporting the Tooro Kingdom and in particular our Empango festivities through the years.”

The Brand Manager for Uganda Breweries Edgar Kihumuro said that Pilsner as a brand recognizes the importance of culture and cultural functions in bringing people together something that the brand Pilsner strives to uphold. We do this through sponsorship of various cultural festivities like this one, previously the Achooli Cultural Festival, the Bunyoro Coronation Anniversary, Bamasaba Sports Tournament, to mention a few. “We are a brand that is deeply rooted in the culture and heritage of the Ugandan fabric.” “Pilsner, aptly known as the Kings Beer, recognizes the important role that culture plays in bringing people together for everyday celebrations, just like our brand. So, our contribution is a way to support Tooro Kingdom as it continues to celebrate its rich history,” Kihumuro said.