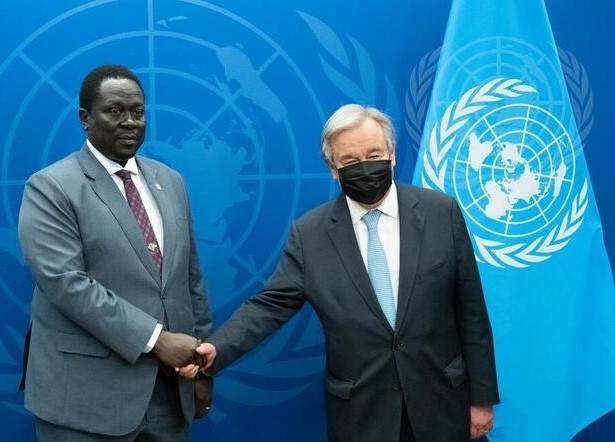 The United Nations Secretary General, Antonio Guterres has pledged his full support to the peace and stability of South Sudan.

He made the assurance at a meeting with South Sudan’s Vice President for Services Cluster, Hussein Abdelbagi Akol at the UN headquarters in New York on Monday.

Akol is due to address the UN General Assembly on behalf of President Salva Kiir.

Climate change, human rights, freedom of the press, rising food costs, and mass displacement and dislocation are top of the agenda of the 2022 assembly in New York.

The Secretary-General opened the General Assembly by emphasising the importance of promoting and executing the Sustainable Development Goals (SDGs) outlined in 2015.

Gutteres joined world leaders and goodwill ambassadors in the call to rescue the SDGs and get back on track to building a better world that “leaves no one behind”.

“The world has a long ‘to do’ list”, he was quoted telling world leaders, asking for more finance and investment from the public and private sectors, to meet growing needs.

However, while acknowledging the current “moment of great peril” for the current world, characterized by conflicts, climate catastrophe, division, unemployment, massive displacement and other challenges, the top UN official stressed that although “it was tempting” to put long-term priorities to the side, development could not wait.

“We cannot let them down. This is a definitive moment… The perils we face are no match for a world united…Let’s get our world back on track”, he added.

For his part, the General Assembly President, Csaba Korosi said it was timely and more necessary than ever to “re-dedicate ourselves to the SDGs” as the world falls behind.

“The pandemic was a postcard from the future, a bleak future of interlocking global crises. One that we want to avoid and that we can avoid. We must now regain the speed lost to the pandemic and to our inaction. Solutions are at hand”, he said.

Kőrösi said it is time to “get serious” about saving the world, urging member states to deliver on promises made.