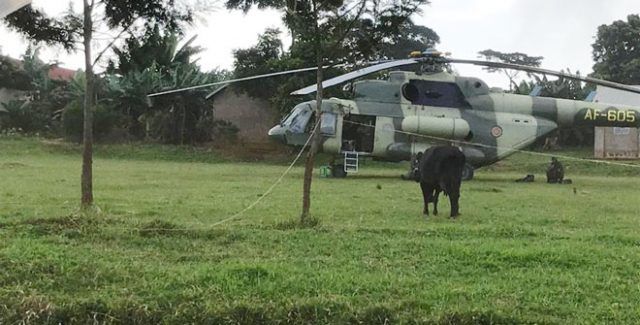 A Uganda People’s Defense Force- UPDF helicopter has crashed in Fort Portal in the west of the country.

According to the URN reporter who is at the scene, the helicopter crashed into a mud and wattle house at Saaka at 10AM, just half a kilometer from the airfield.

According to an eyewitness, three helicopters had just taken off from Saaka airfield but one of them crashed into the house.

The eyewitness says that the occupant of the house who is an elderly woman only identified as Peruth was rushed to hospital.

Other witnesses said that two UPDF soldiers were seen disembarking from the helicopter.

UPDF soldiers have cordoned off the scene of the crash to prevent on-lookers from getting to it.