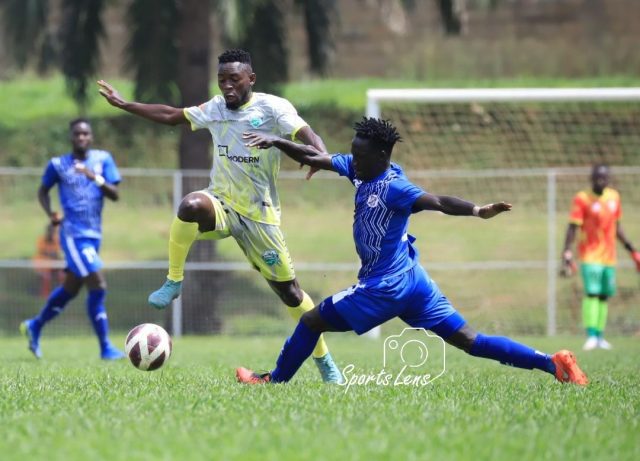 SC Villa got off the mark in their opening 2022/23 Uganda Premier League game of the season.

The Jogoos, hosting at Wankulukuku, claimed a 2-0 win over Gaddafi Modern to clinch maximum points thanks to goals from Gift Fred and Charles Bbaale.

Gift Fred scored the opener, heading home from a well weighed corner kick from Fred Agandu in the 17th minute.

But the Jogoos had to survive nervy moments in a second half they barely threatened.

Gaddafi twice hit the post as they searched for an equaliser in vain, but SC Villa sealed all points when Bbaale tapped home from close range after goalkeeper Joel Mutakubwa had spilled Ivan Sserubiri’s free-kick.

Although the season is still young, the victory provides a glimmer of hope to Uganda Premier League’s record champions who have had a rough run over the past few years.

Gaddafi will feel hard done by the result after dominating the second stanza.

They were at the wrong end of a refereeing decision when they were not awarded a penalty after Sserubiri looked to have handled the ball in the area.

Kitata was one of the six starters for Gaddafi who have played for SC Villa, the others are Ibrahim Kiyemba, Shafic Bakaki, Nicholas Kasozi, Mahad Yaya and Simon Sserunkuma.

Sserunkuma twice shot wide while Kitata arrived late to miss a neat loss pass from Johnson Odongo as the Visitors tried to find an early opening.

Richard Bassangwa also had a chance of his own when he cut inside, only to send his left footed effort wide.

Mahad Yaya rattled the post and so did Johnson Odongo from free-kick, and it wasn’t a day for Gaddafi.

Coach Wasswa Bbosa will remain hopeful that better days are ahead, and will have better options if David Bagoole, Chrispus Kusiima and Godfrey Lwesibawa are available, the latter is with Sand Cranes.

SC Villa face Onduparaka who will be hosting at Bombo on Friday while Gaddafi will sit out match day two before hosting Onduparaka on October 12.