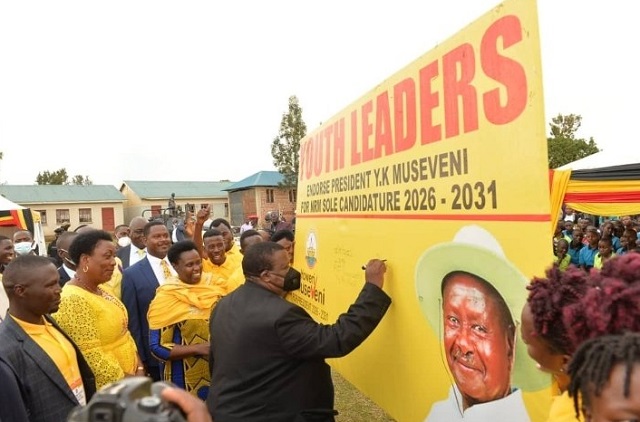 The ministers were on Saturday attending the belated youth day celebrations for Mitooma district, at Bubangizi Secondary School playground celebrated under the theme; “Unleashing the potential and role of youth in nation development.”

The Justice Minister Norbert Mao, on his part said, 2031 should be the start of a new Uganda.

Gen Kahinda Otafiire used the occasion to warn the youth against fights that are based on religion and ethnic grounds, which can destroy what has been set by the NRM government.

Otafiire said that the youth should not be driven by the forces of change, but rather fight for the right cause, rejecting negative philosophy and avoiding fighting wars of ethnicity and religion. He urged them to avoid conflict and learn to emulate the good examples of current leaders.

Norbert Mao disclosed that he was given the assignment to organize a consensus for transition in Uganda, and asked the youth to support him in the assignment which was entrusted to him by the President.

He said the transition will be in three phases, consensus, endorsement, and implementation of what will be agreed upon, hoping that by 2031, there will be a new Uganda.

Mao urged the youth to know their value and not to consider where they are from, but where they are going noting that Uganda will be built on the dreams of young people thus challenging them to dream big.

While speaking at the celebration, Vice President Jessica Alupo urged the youth to have a set ideology that will shield them from others and also accept that being a youth is transitional.

Damian Turiomuriwe, the youth chairperson for Kashenshero sub county, pleaded with the government to revise, reform, and re-establish, the Youth Livelihood Program by incorporating new lessons and challenges learnt, noting that the youth currently have no specific intervention since the Youth Livelihood Program, was halted to cater for the new Parish Development Model.

At the same function, the youth of Mitooma district endorsed President Yoweri Museveni to contest in the 2026 general elections, and the Chief Guest VP Alupo, Gen. Otafiire, and other Cabinet Ministers including Francis Mwebesa, Vincent Sempija and Members of Parliament signed on the board in endorsement.

Alupo however said that the matter will be tabled first before the Central Executive Committee of the NRM party for uniformity.