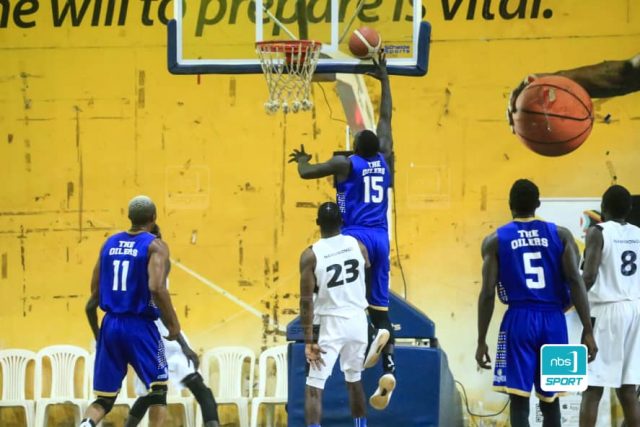 Mande Juruni’s charges, who had lost game two on Friday, now lead the best of seven series 2-1 ahead of Wednesday’s Game four.

Oilers who played catch-up in the whole first half, chased down the game in the third quarter and were on course for an easy win when they went up by 10 points with less than three minutes to go.

But David Dikong Deng who had had a quiet game, went off with clutch shots to draw the Blazers level inside the last minute of the game.

But a corner three from Luak Ruai put Oilers back in control and later held on a spirited Blazers side to clinch their second win.

Dikong scored 15 points, with 12 coming in the last quarter while Chris Omanye and Amisi Saidi had 13 points each, with the latter ejected out of the game after receiving his technical foul.

The Blazers had a good first half as Oilers struggled to get things going.

But when Ben Komakech drained a three ook the midway through the third quarter for Oilers to lead for the first time in the game, there seemed to be no way back for Namuwongo.

City Oilers led by four points at the end of the third, and they continued to soar, opening up a 10-point gap with three minutes left in the last quarter.

But Dikong flipped the switch and brought the Blazers back into the contest; He threaded 8 straight points for the Blazers to tie the game 66-66 with about 50 seconds to go.

Ruai, who had lost possession earlier to send Omanye to the charity line, made amends when he scored a corner three for Oilers to regain their lead.

And it proved a little too late for Blazers to fight back as Oilers moved two wins away from their eighth title.