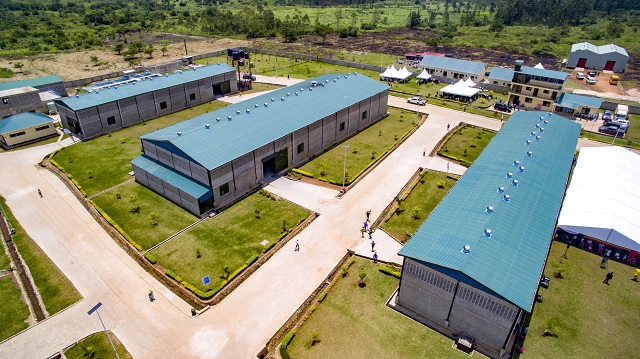 According to Jane Barekye, the State House comptroller, the tannery worth 12 billion Shillings is able to process 10 tonnes of hides and skins into 35,000 square feet of leather per day. Barekye explained that the company has been established on 10 acres of land with an expansion plan which will cover an additional 10-acres.

Barekye adds that the government will inject another 12 billion Shillings to enable the company to process the leather into shoes and other products. She said that the company which began operation in August this year, already has a demand of 3.5 tonnes of leather per day.

David Bahati, the State Minister for Trade, Industry and Cooperatives said that the country has been importing leather and its products worth 40 million US Dollars per year.

Bahati said that once the company becomes fully operational, the government will impose more taxes on imported leather to protect it from competition.

While commissioning the leather factory on Friday, Museveni said that he was motivated to construct the factory after skilling youths in Kampala to make shoes but learnt that the leather they needed as raw materials was supposed to be imported.

Museveni said that he is happy that the company won’t only create jobs but wealth for pastoralists in cattle corridors and other districts. He added that after solving the leather challenge, he will embark on paper-making to stop its importation.

The company is currently buying a kilogram of hides and skins at 2100 Shillings. The factory is run by Engineer Roy Kathavarayan, an Indian with 40 years of experience in the leather industry.

Kathavarayan owned a small leather factory in Jinja before President Museveni appointed him the Executive Director of Kawuma Tannery in Luweero.

The company is expected to employ 1200 people involved in processing leather and making shoes among other things. So far, 90 workers are already engaged in work at the tannery

In 2016, Museveni bought land in Kawumu village to demonstrate to small-scale farmers how to maximize profits, by using a few acres of land for various activities.

On the farm, he has initiated several activities including zero grazing, agriculture and fish farming among other activities.

According to State Minister for Luweero Triangle Alice Kaboyo, there are currently 119 industries in Luweero district and 57 factories are located in Nakaseke.