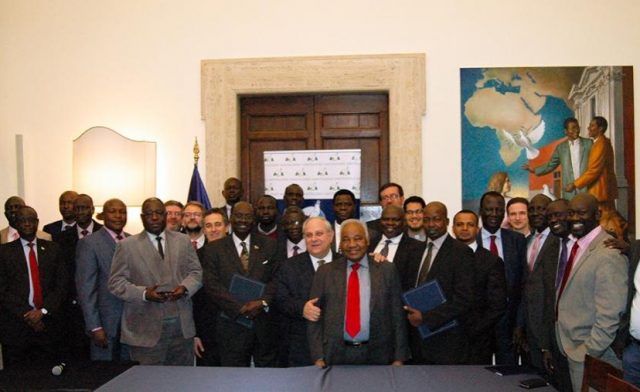 South Sudan’s Transitional Government of National Unity (TGoNU) and representatives of a section of the holdout rebel groups are due to attend peace talks in Rome, despite allegations of ceasefire violations in Western Equatoria state.

Negotiations between the government and holdout opposition groups started in 2019.

In 2020, members of South Sudan Opposition Movements Alliance (SSOMA) met and held talks with the government. The parties, at the end of the talks, agreed to take part in a cessation of hostility agreement brokered by the Rome-based Sant’Egidio community.

However, SSOMA, in a statement released after the peace talks, said it was “informing its entire membership, supporters, South Sudanese at large and the International Community that it has together with the Government of South Sudan signed Rome Resolution on Monitoring and Verification of the Cessation of Hostilities Agreement COHA (of) December 2017 under the auspices of the Community of Sant’Egidio”.

The statement explained that the ceasefire implementation agreement will allow the opposition alliance to participate in the monitoring and verification mechanism, paving the way for further negotiations on the root causes of conflict in South Sudan.

“Having signed this resolution does not mean SSOMA has endorsed the Revitalized ARCSS or accepted it”, the group underlined. The parties agreed later to resume talks in March but no date was fixed. In March 2019, the IGAD Special Envoy to South Sudan refused to acknowledge any new group formed after the signing of the peace agreement, fearing that would lead to a review of the power-sharing and security arrangements.

No agreement has been reached with them though talks have continued to be pursued.

Sources within, however, told {Sudan Tribune} on Sunday that Malong and Amum are due to travel to Rome for talks next week. South Sudan’s minister of presidential affairs confirmed the readiness of the government to resume talks with all the holdout groups but did not provide detail and the exact date of when negotiation would resume and whether the talks would continue to be held in Rome or move to Kenya.

The military spokesman for South Sudan United Front (SSUF) claimed in a statement South Sudan defence forces under the command of Major General Akech Adim moved out of their defensive position in Western Equatoria and launched an attack on the position held by their groups in Lokomadi area.

“The office of the SSUF/A official military spokesman secures this opportunity to inform the general public leadership of our partisans in the fraternity, south Sudanese and the peace guarantors about the malicious assault taken by the bloody regime forces once more to attack our position in the noon hours yesterday 01 October 2022”, said Col. Philip Deng Nguot.

He said their forces repulsed the attack at around 3:30 pm local time and managed to capture some weapons after they allegedly scattered the forces during the fighting.

No statement was issued by government forces to confirm or deny that clashes occurred.