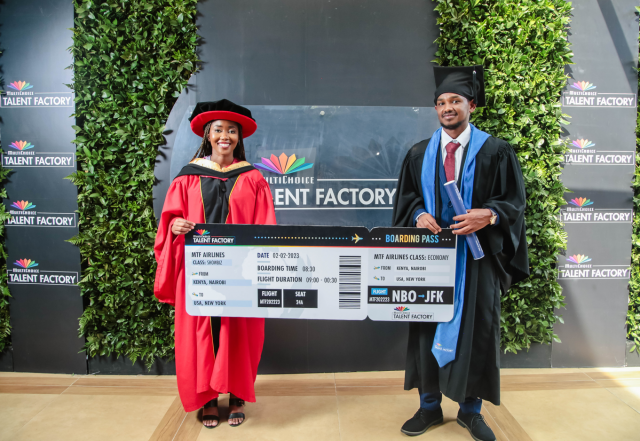 Designed as a series of educational virtual masterclasses, the series aims to empower emerging and existing talent from across the African continent, by bringing the best-in-class both locally and internationally of each of the selected topics.

The series officially kicked off on 08 September 2022, with a Directing Actors Masterclass. The session was facilitated by Jonathan Whittaker a New York-based Producer and Director with over 20 years of experience in lensed features, short films, music videos, live concerts, commercials, TV shows, virtual reality experiences and 3D specials.

The Directing Actors masterclass focused on the tools and techniques used by directors to communicate the essence of a scene to their actors.  Attendees of the masterclass explored and practised the principles of acting techniques, learned the vocabulary of filmmaking for actors and understanding the art of collaborating with talent when creating content.

Aspiring and established African storytellers are encouraged to attend the upcoming masterclasses:

Date and time: Monday, 14 November at 18:00 – 19:30 CAT
The Production Design Masterclass will focus on The Art of Visual Storytelling and will be hosted by Uzair Merchant. Uzair is a multiple award-winning filmmaker, designer, and the founder of bkreativ productions in Vancouver. Having studied Production Design from Nottingham Trent University in the UK, Uzair then pursued his dreams within cinema at the New York Film Academy earning a certificate in filmmaking. He has 14 years of experience in the film business in various countries and projects ranging from features and TV shows. Uzair has also designed the World’s Largest Cultural Theme Park: Global Village in Dubai for 6 years, winning Best Pavilion Award. His last short series ‘Chasing lines’ (Shot on iPhone) has won him 11 awards from Los Angeles Film Awards, New York Film Awards and many more international festivals.

For this masterclass, attendees can expect to learn more about production design elements such as mood, tone, character, creating sets, and the designer’s role in the overall aesthetic and artistic look of the project. As well as everything and anything visual, that not only helps tell the story better but creates the environment for the actor to live in and the audience to want to live in it.

The NYFA x MTF series will continue in 2023 with exciting themes and renowned facilitators. Filmmakers and industry professionals can look forward to the below masterclasses:

Dialogue Writing – Putting believable words in the mouths of your characters

The New York Film Academy has been a key partner for MTF offering specialised courses for MTF students in the production of micro-documentaries and PSAs (Public Service Announcements).

Other masterclasses coming up include:

Theme: Music Rights Masterclass
Date and time: Wednesday, 09 November 2022 at 18:00 –  19:30 CAT
The Music Rights Masterclass will be facilitated by David Feinberg, David is an attorney who specialises in entertainment law, with a key focus in music, publishing, media and television. He is a partner at Rosengarten & Feinberg, a boutique law firm that specialises in the entertainment, media and broadcasting spaces. David is ranked by the international rating company, Chambers and Global, in the media and broadcasting industry and has for many years practised as a legal specialist in the music industry. His clients include record companies (both major and independent), prominent artists, songwriters, producers, advertisers, broadcasters, managers and content aggregators.

Do follow the MTF social media pages for announcements and links to register for the upcoming masterclasses.

African talent is taking the industry by storm and it’s not slowing down anytime soon. To find out more about the MultiChoice Talent Factory, visit: multichoicetalentfactory.com/about.

Mbabazi Preaches The One Gospel of Love