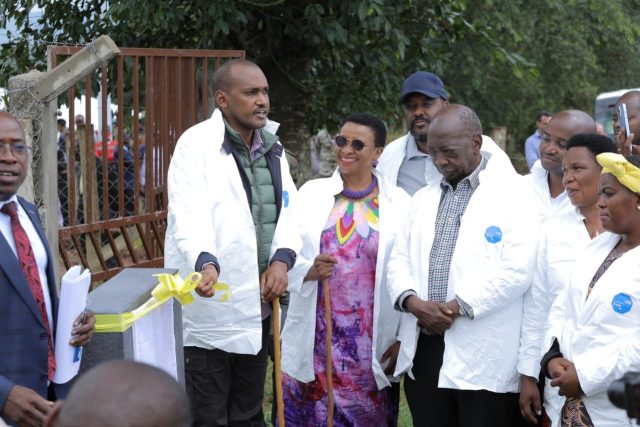 The trial vaccine has passed initial test stages (laboratory tests, proof of concept, on-station clinical trials administered both orally and by intramuscular injection) of prequalification and now proceeds to the final geographical trial stage. Upon the successful conclusion of this trial, results will be assessed for quality standardization which makes the vaccine safe for public use.. The approved use of the trial vaccine will save the country an annual economic loss of UGX 3.8 trillion caused by ticks and tick-borne diseases.

This launch is a result of efforts by NARO scientists towards developing a lasting solution to the tick challenge that has caused substantial economic loss to livestock farmers in this country. NARO scientists have developed four injectable anti-tick vaccine candidates, namely NARO-RA (Rhipicephalus appendiculatus), NARO-AV (Amblyomma variegatum), NARO-RD (Rhipicephalus decoloratus), and an additional innovation, NARO-CV (a cocktail vaccine) against the brown, blue, and red ticks with promising results.

As part of integrated control programs, anti-tick vaccines promise an environmentally sound, and effective intervention for the control of tick infestations and transmission of Tick-Borne Pathogens (TBP’s). The antigens used are immunologically active tick proteins that stimulate antibody production once inoculated into a vertebrate host. Protection is achieved when specific antibodies are produced by immunized hosts, and when ingested by the attaching ticks, they disable tick feeding, growth, reproduction, and general tick fitness.

Overview of the tick situation in Uganda

In Africa, Tick-Borne Diseases (TBDs) are considered an important livestock disease challenge, especially among smallholder farms in East, Central, and Southern Africa. In Uganda, the favourable equatorial climatic conditions suitable for livestock production also support several tick populations, which enhances the transmission of TBDs. Over 75% of total losses of cattle in Uganda is attributed to TTBDs, and control costs for TTBDs in cattle account for 86% of the total animal disease control costs. East Coast fever (ECF) is responsible for about half of all calf deaths in the pastoral and agro-pastoral production systems.

The majority of the cattle reared in Uganda is located within a “cattle corridor” which occupies a proportion of approximately 44% of Uganda’s total land area from the south to the north-central part of the country. Overall, the animal resources-based industry in Uganda is estimated to contribute 17% of the national Gross Domestic Product (GDP), which is worth approximately USD 4.7 billion (Uganda presidential advisory committee, 2017). Unfortunately, the industry is plagued by various constraints, among which TTBDs rank high.

costs to control livestock diseases in the country. For example, annually, ECF can kill 30% of newborn calves of indigenous cattle and up to 100% of crossbred or pure cattle.

TBD is responsible for significant economic losses to farmers through debility, direct mortality, morbidity, loss of milk, and control costs in the purchase of acaricides, chemotherapy, and vaccination. Whereas production losses due to Tick- & Tick-Borne Diseases (TTBD’s) are more pronounced among exotic cattle breeds and their crosses, native indigenous cattle, especially calves and adults in a state of endemic instability are also affected. In Uganda, the loss caused by TTBDs is estimated at over USD 1.1 billion annually. The losses are realised as calf mortality (30% of the calf crop dies), farm disease prevention and control, farm input costs, loss in milk (USD 187 million) and meat production (USD 472 million), and blood loss (USD 26 million).  The country imports 378,000 liters of acaricides and 83,000 litres of associated drugs, causing an annual forex outflow worth over USD 83.3 million.

Once the NARO Anti-tick vaccine is licensed by the regulatory authorities for use, most of the losses associated with ticks and tick-borne diseases incurred along the livestock industry value production will be no more.