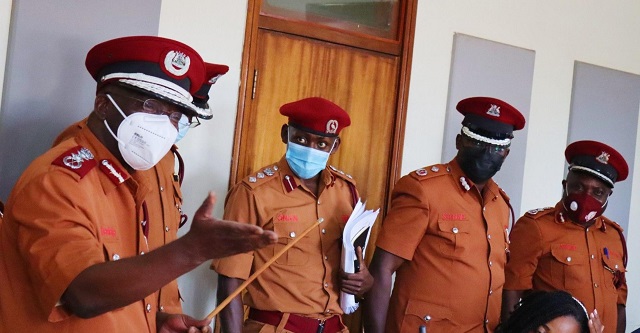 Johnson Byabashaija, the Commissioner General Uganda Prisons Services has asked supporters of the National Unity Platforms (NUP) party, to stop pestering him to release their members in prisons, saying he has no powers to do so.

He has instead advised them to redirect the appeals to the responsible government agencies. He said this while appearing before the Human Rights Committee of Parliament on Tuesday to explain the circumstances surrounding the continued detention of numerous suspects of alleged capital offences without trial.

He was responding to a query from Allan Mayanja, the Nakaseke Central Member of Parliament, who tasked him to explain why the prison authorities have not bothered to make recommendations to the line government agencies to release political prisoners that have been in detention for long without trial.

Byabashaija said he does not know the NUP suspects in his custody, adding that he cannot release suspects because he was not the one who took them to prison.

Fox Odoi, the Chairperson of the Human Rights Committee of Parliament, who doubles as the West Budama North East representative defended Byabashaija, saying his actions are within his legal mandate as the prisons boss.

Queries about the fate of the detained political prisoners come a month after NUP revealed that at least 458 of its supporters are missing and their whereabouts remain unknown. However, the list containing details of the missing people from NUP only had 243 names.

It’s now a year since opposition lawmakers Allan Ssewanyana of Makindye West Constituency and his Kawempe North counterpart, Muhammad Ssegirinya were arrested and charged for alleged participation in the killing of 26 people in the greater Masaka sub-region.

In September 2022, Speaker Anita Among called for the speedy trial of the lawmakers after the opposition, led by Mathias Mpuuga, the Leader of the Opposition expressed discontent on the floor of Parliament at how the security and court have been sluggish in administering justice to the detained lawmakers.

All Set for the 2022 Kampala Geopolitics Conference