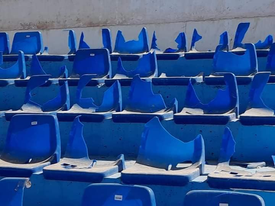 The regional football council – CECAFA has fined South Sudan, after its football fans invaded the field and broke chairs at Sudan’s Al-Hilal Stadium on November 8.

The Council of East and Central Africa Football Association has slapped the country with a fine of 1,000 US dollars and compensation for material damage over the fans misconduct during the semi-finals against Ethiopia.

This was after the national U-20 football team defeated their Ethiopian counterparts on penalty shoot-out on Tuesday, November 8 to qualify for the final.

The following day, pictures showing broken seats at the Hilal Stadium were widely circulated on social media, prompting investigation from the CECAFA.

The decision has been made yesterday by CECFA disciplinary committee after the said match reports indicated that South Sudan invaded the stadium after the final whistle.

“South Sudanese fans jumped over the barrier fence and entered to the pitch of the play after the final whistle, spectator’s seats were broken while the pitch perimeter was damaged,” read the findings of CECAFA investigation.

According to official communication from CECAFA, the decision was made in accordance with the CAF disciplinary Code 2018.

“In that regard after consideration of the security report, the disciplinary committee take note of the violation of the CAF regulations by South Sudanese spectators,” reads the email.

According to article 151 (2) of the CAF disciplinary code 2018, national federations are held responsible for the behaviors of their supporters, especially with regard to throwing missiles and invading the pitch.

The CECAFA disciplinary committee considered that South Sudanese has violated the above-mentioned rules and regulations.

As a result, South Sudan Football Association has been fined to pay for all damages that occurred on spectator seats that were broken and the internal field fence was damaged.

In addition, South Sudan was fined an amount of 1,000 USD by CECAFA.

The South Sudan football association, the Sudan’s football-governing body and Al-Hilal FC are yet to comment on the matter.