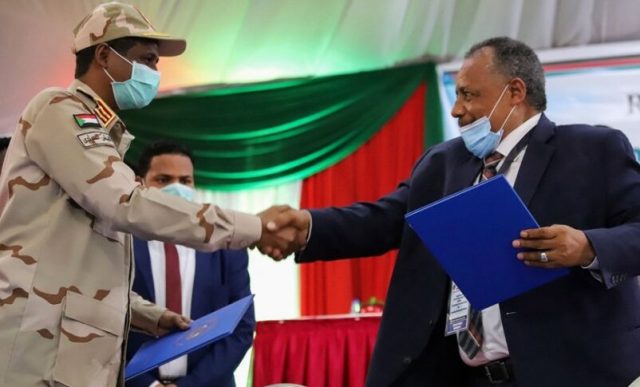 Tut Gatluk Manime, an advisor to President Salva Kiir, described the agreement as a “significant” step towards ending conflicts in Darfur, South Kordofan and Blue Nile.

The Juba Peace Agreement was signed on October 3, 2020 by Sudan’s transitional government and many of the country’s main warring factions. The agreement, which is highly complex, covers a range of areas, including governance, security and transitional justice and is intended to inform the future constitutional negotiation process.

“That was a historic agreement. It was a step in the right direction. There is nothing wrong with it.  It has been incorporated into the constitution and brought the signatories, especially the armed movements, into the transitional government,” said Manime.

He said the peace agreement is now guiding the country until elections are held.

Manime acknowledged the slow implementation of the Juba Peace Agreement, but stressed that the accord remains one of the legal bases for the participation of some political forces in the administration and management of the country’s political affairs.

He expressed optimism that the peace agreement would fully implemented.

However, the Juba Peace Agreement has been criticised by political forces including the Forces for Freedom and Change (FFC) that call to review several chapters, particularly the security arrangements because it allow armed groups to keep arms until the elections.

Also, on November 13, a group of retired army officers in Sudan announced the establishment of the Patriotic Entity Forces (PEF), an armed movement aiming to protect the interests of the people of central and northern Sudan.

The group is also advocating for cancelation of the October 2020 agreement.