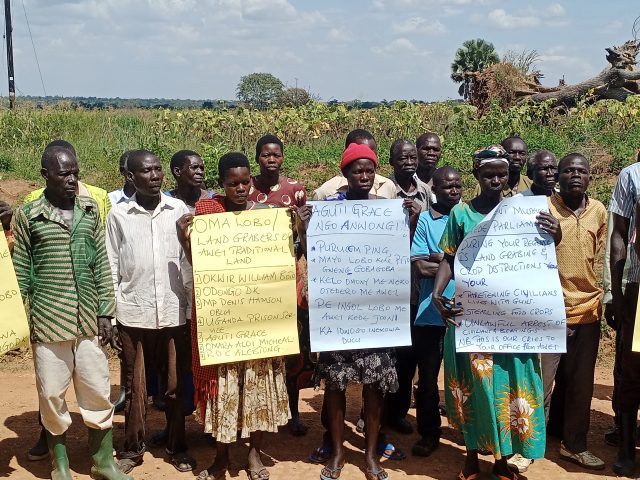 The land that covers 2,650 acres with more than 2000 residents farming on is said to be public land that was donated by government during Obote’s regime according to District Leaders.

They accused some of their leaders of having a hand in the eviction of the community from the land.

They say they are very ready to die for their land provided they are standing on the Truth.

Clara Adongo one of the residents who is most likely to face eviction says she has been using the land since she got married with now nine children but she is shocked with this move.

She added that afternoon destroying their crops her grandfather got stroke and eventually died.

Luunya Rufino another resident and also the chairperson land owners who face eviction says the grandparents acquired this land in 1913 and since then no one has claimed the land until 2017 where some of them were arrested.

He says their attempt to reach their leaders for help were in vain until June 14th 2022 when the RDC together with the security started destroying their crops.

Imat Sarah Okello says due to lack of land for cultivation he can’t afford to pay school fees for her children.

Okello says she grew up in this land, got married in this land but is worried about where she would take her nine children.

Bonny Okwir another resident requested that leaders from neighboring districts of Teso, Acholi, Karamoja and also lango to stand up for them since if not protected will affect the whole country.

“We appealed to different stakeholders and leaders from different neighborhood of Karamoja Teso, and Acholi to come to our rescue,” said Okwir

The chairperson LCIII for Awei Sub County Sam Oyena says no one can be evicted from the land without compensation and a startup activity to sustain the life of the community.

“There is no other alternative activity given to my people. How can the government evict the people from the land they survive from? This is alarming and the government should consider the wellbeing of its people,” said Oyena

Speaking to David Kennedy Odongo the chairperson LCV of Alebtong denied the allegation saying the cabinet sat on the 1st of August 2022 and resolve that all government land be use to plant to crops to fight food insecurity in the country. He says as the district they can’t reverse the resolution made by the cabinet.

“It’s the resolution made by the cabinet we the district we have no mandate and power to stop the ministry from accessing the land to set the development officials from MAAIF are the once who have handed over the land to Uganda government prison,” said Odongo

When contacted the state minister for Agriculture Maj Rtd Fred Kyakulega says they can’t grab any land that belongs to the community and that the law should prevails but when it belongs to the central government then they will take.

The fight over Adero ranch erupted in 2017 and also led to the arrest of 11 people which were later released on bail and the matter is in the lira high court.