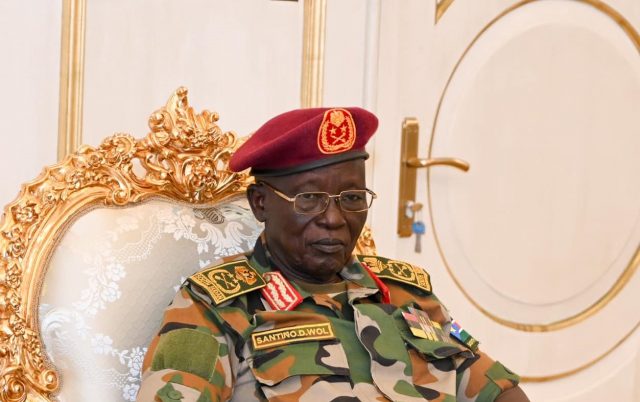 South Sudan’s army chief of staff, Gen. Santino Deng Wol has urged the unified forces to guard and protect the country’s territorial integrity against foreign aggression and any form of incursions.

He was speaking during the occasion in which at least 3,601 necessary unified forces graduated in South Sudan’s Unity State over the weekend.

“As you graduate as members of the police force, we work together with you in protecting the lives and properties of the people and in maintaining law and order. We do that without taking sides”, explained Wol.

He added, “Do not forget as you are now going for your deployment [and] we need the security of South Sudan to be stable so that the citizens in all the seven counties of Unity State and those still in IDP [internally displaced peoples] camps can peacefully return to their respective homes”.

The top army chief urged the forces to desist from politics and shun tribalism.

“You have to be out of politics because there is a difference between a soldier and politician. You cannot serve two masters at ago,” stressed Wol.

Meanwhile, the country’s Defense minister, Angelina Teny, said the graduation of unified forces was a step towards the 2024 general elections.

“As you know, we made a roadmap based on the peace agreement and it drives us to democracy. You have a great role to play,” explained Teny.

She added, “You will create a conducive environment for free and fair elections”.

For his part, the presidential advisor on security, Tut Gatluak Manime, lauded the unified forces upon their successful training and graduation.

“We want soldiers like these who are well trained and disciplined and who will defend South Sudan and a police force that will maintain law and order, prison servicemen who protect inmates and wildlife that will protect the national parks,” stressed Manime.

“You will defend the constitution and citizens of South Sudan and we will be together with you in any location you will be deployed in,” he added.

The presidential aide urged the Joint Transitional Security Committee to prepare for the training of the second batch of the forces within a month.

The September 2018 revitalised peace agreement requires the parties to train and graduate a unified force of 83,000 personnel to take charge of security during the transitional period. The unification of the army had delayed amid missed deadlines.