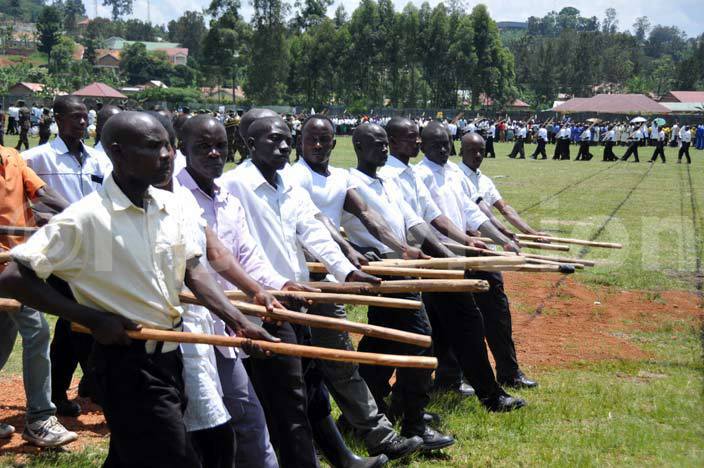 Kayihura while speaking at the Erinayo Oryema memorial lecture organized by the Uganda police at Makerere University on Saturday October 1 said that whereas there are some flaws with the initiative, the contribution of crime preventers in combating crime is commendable.

Kayihura said that throughout his country meetings with police officers, good reports have been generated about Crime preventers across the country saying they must be supported by all means.

“I have been holding conferences with police officers, and they are the ones who were formerly skeptical, but overwhelmingly they are appreciating the work of crime preventers. Definitely they are a value addition and its an initiative we should not scorn on,” said Kayihura.

Dr. Hellen Nkabala Nambalilwa from the department of Religion and Peace studies at Makerere University who discussed a paper presented by Dr. Mutebi Golooba hailed the work of crime preventers saying all citizens must play a role in fighting crime.

Dr. Nkabala urged crime preventers to stick to their roles and responsibilities.

Prof. Edward Kirumira the principal College of Humanities and Social Sciences (CHUSS) who represented the vice chancellor said Makerere is proud of the partnership with police and the crime preventers saying it enhanced community policing.

Dr. Mutebi Golooba presented a paper under the theme of the lecture; “The Public is the Police, the Police is the Public. Fostering Community Policing in Uganda” which was discussed by Dr. Hellen Nkabala of peace and conflict resolution at Makerere University.

Born on 1st January 1917 in Tangi village, Purongo Sub-county in Nwoya, Northern Uganda, the late Lt. Col. Erinayo Wilson Oryema was enlisted in the Uganda Police Force in 1939 and rose through the ranks to eventually serve as the first African Inspector General of Police from 1964 to 1971.

Oryema was together with Archbishop Janani Luwum and the then Interior Minister Charles Oboth Ofumbi murdered by security forces of the government of President Idi Amin for their part in an alleged coup.