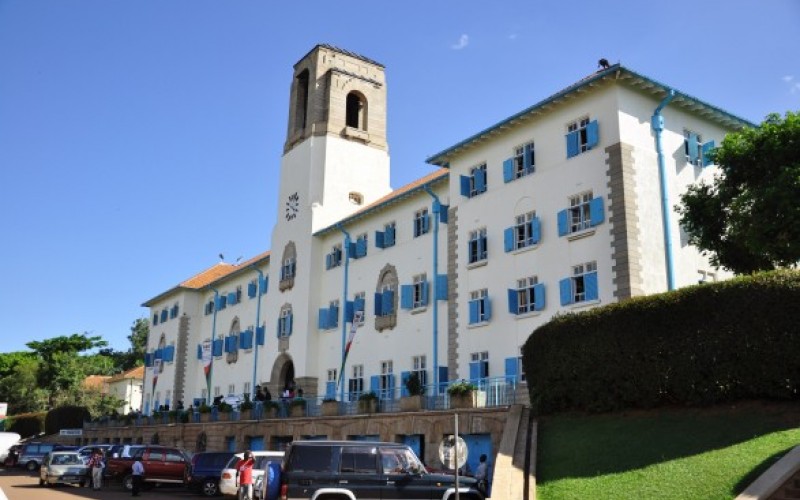 A Makerere University administrator in charge of the Main administration block is in spotlight for conning a student over admissions. Elias Nuwagaba the name provided by the complainants that URN learnt in an exclusive interview convinced the student and his parent that he would offer them a place for Medicine and surgery if they paid him 8 million shillings.

Apparently, after negotiations, a student and her mother agreed to pay 2 million shillings to get a place at the country’s best University. After a failed deal which Nuwagaba distanced himself from the deal which prompted them to seek assistance from the authorities.
Clintonie Nahurira 19, of Igayaza in Kakumiro district in Western Uganda has today together with his mother Allen Kyohairwe stormed Makerere University demanding money from Nuwagaba whom they referred to as a professor but instead was found out to be the custodian of the Makerere University Main building.

This came after Nahurira had been dropped from the admissions after failing to raise the cut off points for Medicine this year. He had got 15 points in his Physics, Chemistry, Biology and sub-Maths (PCB/Sub-maths)

It is alleged that after conning money from this student, Nuwagaba advised the boy to start attending classes at the Mulago based School of Medicine as he sorts out the admission letter.

Nahurira had spent about 2 months studying at medical school, doing tests but says he did not have a registration number and students number to put on his test scripts.

Nahurira said over the weekend that he had to communicate to his mother in the village of the developments and how the university professor was demanding for more money. This prompted Allen Kohairwe (Nahurira’s) mother to constantly call Nuwagaba who barely returned her calls.

“My mum would call and he would not pick, but he would call me to tell my mum. So he would just tell me then I talk to my mum. And he could only prefer texts. He called me again after sometime and told me that your mum has failed to give me my money so you have to go and do poultry course,” Nahurira.
“My dream was to do medicine and surgery, but now I feel so bad that I realize he was conning us. At least he would have told us the truth that he won’t manage and we try a private university. I have lost a lot of money, remember I had to pay for the hostel, I would eat, and all those things as you know,” Nahurira noted with sadness.

Nahurira a former student of Kawempe Moslem highly anticipated and applied for Medicine and Surgery after scoring 15 points in Physics, Chemistry, Biology and sub-Maths (PCB/Sub-maths) only to be dropped on admission.

After missing out on his most desired course, Nahurira was told by a one Gideon Bwomezi a former student of Makerere that he knew someone who would secure him space for the course he wanted.

Bwomezi then linked them to Mr. Elias Nuwagaba who demanded 8 million shillings to do the work. Nuwagaba who at that time told both the student and the parent that he was a lecturer at Makerere University guided them to a meeting place at Chez Johnson Hotel in Nakulabye a Kampala suburb.

“When our family friend learnt that I had not been admitted on Medicine, he suggested that he would connect us to someone who could help. I was with my mother when we met the guy at a hotel and he asked for 8 million from my mother. Being a peasant, my mother could not afford the money and so we started bargaining until we all agreed on 2 million shillings,” Nahurira reveals.

He adds; “when I missed out on the admissions, the guy was like the marks are good, I can help you get to Mulago medical school.”

In order for Nahurira to succeed in the process, he was asked by Nuwagaba to apply for a course so that once he is a student, he can change the course.

He (Nuwagaba) applied for him and all the courses he applied for were arts courses. Nahurira was then admitted to do a Bachelor in Development studies under registration number 16/U/20744/PS at a Makerere University affiliate Nsamizi Institute of Social Development.

“After being admitted on that course, my mum was not happy and so when I told the guy, he told me that it very difficult to apply for a change of course from an arts course to a science course like Medicine. So it was during Bazaar and there were some courses that were still being advertised. He told me, apply if they give you poultry there it will be easier to switch,” Nahurira said.

Nahurira adds that Nuwagaba had asked him to continue attending medical classes at Mulago as he handles his course issues.

“After applying for poultry, they gave it to me, and at that time, I have two courses which I was admitted on. Unfortunately they blocked because they were like I could not have two courses as I was taking a chance for another person. When I lost that science course, he told me to write to the deputy academic registrar to instead block development studies and unblock poultry since it was a science course.”

As the process of securing a place in medical school huge, Nuwagaba allegedly as a way of pushing away these people demanded for more money claiming he was undergoing trouble.

“He called me, my mum had already given him 2.2 million and I met him at UH (University Hall), and told me that now you are going to tell your mum that now she should add more money. You see how I am doing things. At first he had said we give him 1M and when things go through we add him another million. But when he called me he told me that you see things are becoming too long and I am using many people in those offices and I have to give them money but I had already told her that my mum didn’t have money at all,” Nahurira exclusively told URN.

Nahurira says he had to communicate to his mother in the village of the developments and how the university professor was demanding for more money. This prompted Allen Kohairwe (Nahurira’s) mother to constantly call Nuwagaba who barely returned her calls.

“My mum would call and he would not pick, but he would call me to tell my mum. So he would just tell me then I talk to my mum. And he could only prefer texts. He called me again after sometime and told me that your mum has failed to give me my money so you have to go and do poultry course,” Nahurira.

Nahurira who currently has been staying in Atiz hostel in Makerere Kavule says when the situation was seemingly not promising; he called his mum to meet Nuwagaba since they had prior entered an agreement.

“My mum came yesterday (Wednesday) and when I called him telling him that my mum wanted to at least talk to him, he did not respond, then when my mum had left to sleep in a lodge and I left for hostel, a strange number called me and the guy said I am a police officer from Makerere University and one of the staff has reported a case that you and your mum are threatening him and I would like you to come tomorrow (Thursday) at 4:40 pm at police and we explain,” said Nahurira.

Nahurira further confesses that they never wanted to take the matter to the police since Nuwagaba was cooperative until he involved police.

“We felt insecure and we went to the head quarters in Kibuli and  afande called Makerere and referred us to the chief security officer so we are here to be helped,” Nahurira.

Allen Kyohairwe said; “We need this man to give us some money and we go to look for another university. We have seen that we cannot get help from here. I have sold everything at home, I sold all my goats to pay this man, he looked old and genuine but he is turning out to be something else.”

Nahura equally says he has changed his mind of studying medicine. “For me I had told my mum that I am going to leave these things of medicine, at least if this guy gives us some money, I wanted to go and try other universities.”

When URN contacted him on phone through the contacts provided by the complainants on Thursday October 13, Elias Nuwagaba denied dealing with the duo.

“It is not true and I don’t know anything about it,” said Nuwagaba switching off his phone.

Both Allen Kyohairwe and his son Collins Nahurira have been camping at Makerere University police since yesterday. The two waited the whole day yesterday (Thursday) to meet Nuwagaba but in vain.

When URN learnt of the failed meeting at police, we contacted Nuwagaba who in a phone conversation denied and sharply insisted that he was mistaken for another person.

However, Clintonie Nahurira insists that he (Nuwagaba) is the man they have been dealing with and said they have never dealt with anyone called Julius Masaba and said the when they gave the phone number to the chief security officer of Makerere University Jackson Mucunguzi, he said it is the same he has in his phone.