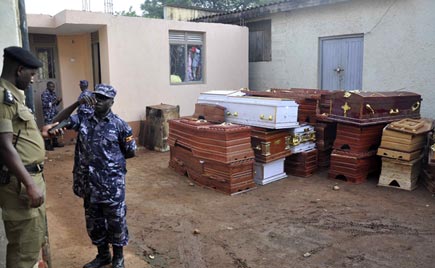 A group of rattled carpenters and other traders in the neighbourhood of Pastor Samuel Kakande’s Synagogue Church of all Nations on Thursday staged a protest at the famous Pastor’s church in Makerere, Kawempe Division.

The traders accuse Pastor kakande and the church for causing flooding in the area resultant from the diverted water channels during construction of the church’s parking lot.

The enraged protestors who included coffin dealers were reportedly planning to carry coffins to the church to demonstrate their dissatisfaction with the pastor’s actions.

Police was however quick, swinging into action to stop the protest and arrested the ringleaders on charges of “holding an illegal assembly”.

Mr Paul Kangave, the deputy spokesman for Kampala Metropolitan Police said the protest was illegal since they had not notified the police.

This isn’t the first time Prophet Kakande’s church administration had been at loggerheads with neighbours after Wandegeya residents protested the ring-fencing of the spring well, which was the main source of clean water in poor neighbourhood a few years back.

Pastor Kakande who is famous for distributing “Holy Water” to his followers has been in the lime light of late following his announcement of “Holy Rice” which he intends to sell at Shs50,000 per kilogram.