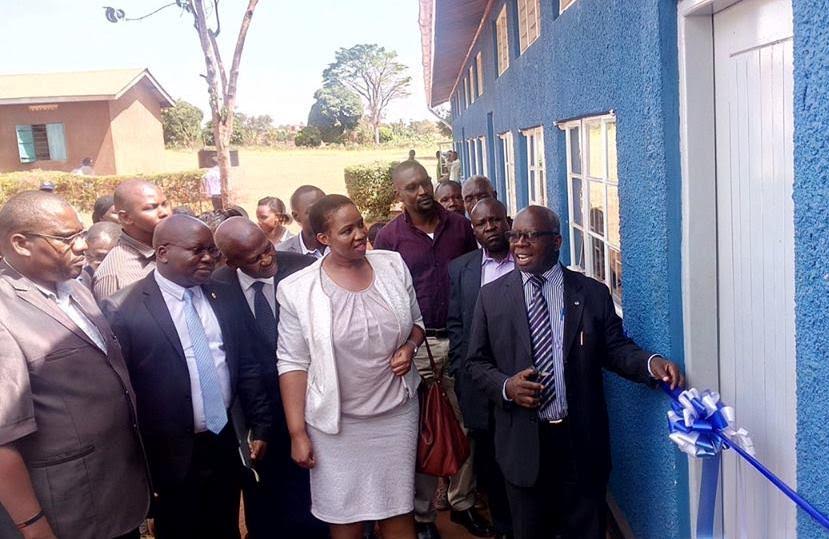 Eskom Uganda has handed over the newly refurbished Njeru Primary School to the School’s management and Njeru district officials.

At the close of 2016, Eskom embarked on a facelift project to give a whole new look to the dilapidated School.

Njeru Primary School is a government school under the Ministry of Education and Sports and was started in 1960.

It was previously located in the present day Nalubaale power station but later relocated to pave way for construction of the then Owen falls dam to Njeru village, where its presently located.

The School was dilapidated with broken windows and roofed with asbestos roofing materials which is said to be a Health risk for the pupils.

Eskom Uganda, the generating company running the Nalubale and Kiira power stations injected 110 million Uganda shillings to reinstate the lost glory of the School which faded away with the reduced number of children currently standing at 400.

Speaking during the ceremony to officially hand over the renovated School, the Managing Director Eskom Uganda, Thozama Gangi noted that the renovation of the block is the first phase and the second phase will include fencing of the school, installation of proper electricity supply, water harvesting, renovation of staff housing and a computer lab. “We are in a changing world with fast moving technology we should not live the children behind. We are looking for partners who will join us to create a conducive learning environment for the children in Njeru primary school” said Thozama.

She further said that Eskom is evaluating ways on how to help the parents by finding innovative ways to utilize the available land so that they may be able to feed their children hence motivating them.” This will end the debate on whether it’s the government or the parents to feed the UPE children” Thozama concluded.

The Guest of honour Dr. Mukasa Lusambu, Assistant Commissioner for Primary Education, Ministry of Education and Sports urged the School management to enforce equitable education on the young scholars to make them competitive at national level.

Dr. Lusambu said the renovation of this School will enable the teachers to better attend to the individual and special needs of the children. She emphasized the importance of education in building a strong and productive economy. “I hope when the whole project is complete, Njeru Primary School will be able to gain it’s lost glory and compete at the National level” he noted.

On his part, the Njeru Town Clerk Mr Kasajja Jamil Kailu hailed Eskom for the continued support extended to Njeru Municipality and the Primary School in particular. He noted that the renovation of the School, will attract and increase the number of school going children in Njeru Municipality and also create a conducive environment for the children to compete at National level.

Eskom Uganda Limited since inception in 2003 set out to engage in a number of Corporate Social investment programmes with the objective of enhancing the quality of life of the communities in which it operates. The programmes focus on selected areas of national priority, that’s to say, health care, education, environment conservation and safety practice/culture.