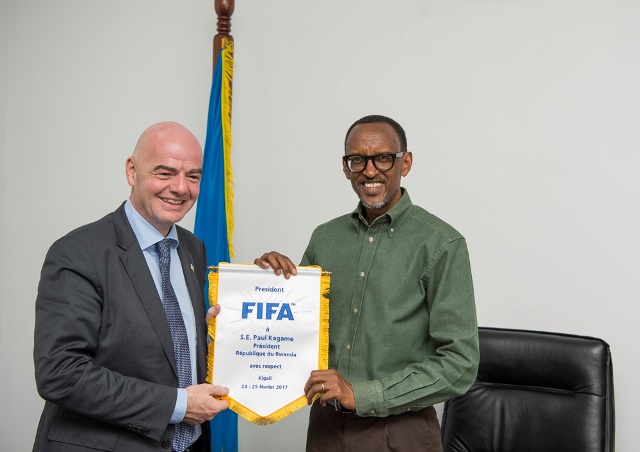 Infatino arrived in Rwanda on Saturday for his first official visit as head of the world football’s governing body a year after his election.

After holding talks with several football stalwarts in Rwanda’s capital Kigali, the former UEFA secretary-general headed to Gabiro to pay courtesy call on Kagame, who is presiding over a five-day retreat of senior government officials – a key annual forum where government and private actors reflect on major national policies and chart the next development agenda.

Speaking to the media earlier, Infantino, who replaced fellow Swiss Sepp Blatter as FIFA president in February last year, paid tribute to President Kagame’s passion and love for football, particularly commending him for his continued financial support toward the regional CECAFA Kagame Cup competition that attracts top clubs from more than 10 regional countries.

During his visit, Infantino laid the foundation stone for the construction of a four-star FERWAFA hotel in Remera, Kigali, and reiterated his organisation’s continued commitment toward Rwanda’s football.

FIFA will bankroll the construction works for the Rwf3.8 billion facility at 65 per cent, with the rest expected to be raised from other funders, especially banks.