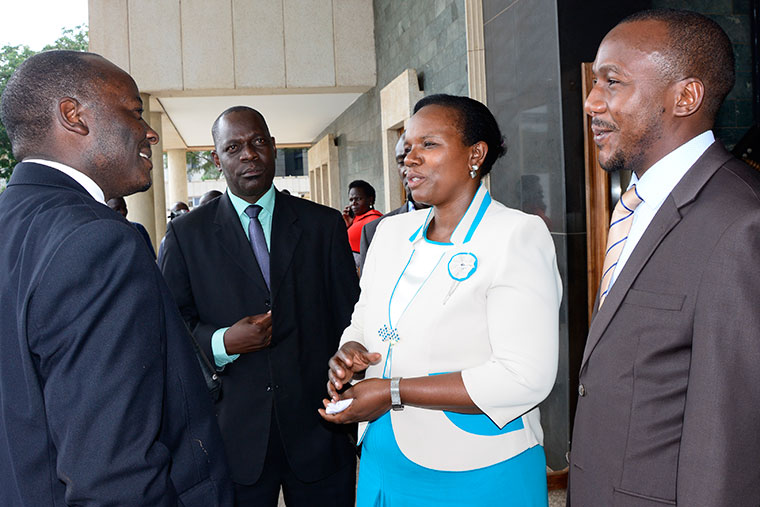 On February 28, Forum for Democratic Change (FDC) secretary for mobilisation Ingrid Kamateneti Turinawe lost in the race to become one of Uganda’s nine representatives to regional assembly EALA. There were well over 40 approved contestants. However, what makes Turinawe’s loss interesting is the hostility members of ruling NRM party MPs greeted her with when she appeared before them to beg for votes. The MPs accused her of being behind previous anti-corruption campaigns that saw piglets decorated in NRM party colour yellow dropped at parliament in criticism of MPs extravagance. The legislators, informally called “MPigs” in opposition circles, even charged at the opposition stalwart known for her bold activism for allegedly calling them, well, pigs. Following her loss, Turinawe has written a message for all Ugandans, encouraging them and exposing the regime even more. The Tower Post here publishes the message.

Countrymen and women, I wish to report to you that the energy, time and resources I invested in the East African Legislative Assembly [EALA) race were worth it. As one of the two FDC candidates, it was a very challenging period for myself and those who believed in the ideals I stood for; and not because we expected it to be an ease sail through, but because we believed our participation would be a big contribution to the struggle we are engaged in.

We premised our campaign on the promise to broaden the struggle for change, that would deliver us a better Uganda whose leaders will NOT poison our national politics, corrupt our leaders, mismanage our public affairs and compromise the very existence of multiparty democracy.

My candidature was for those who believed we can use every available opportunity to expose how far and what has gone so wrong with Uganda‘s Politics, but also gather evidence necessary to challenge the procedures and processes in which EALA representatives are elected.

A permanent solution must be sought and found. We motivated ourselves and pushed because we never give up- and we shall never quit. Amidst all the setbacks, at the end, 25 MPs with a conscience rose above pettiness of mockery and hate. They voted for purpose and reason.

I thank you gallant honourable members who cast your vote in my favour. I wish to inform our people and assure you that in our struggle we don’t lose. For every step we make, we get closer to our objective and once we have achieved our goal, we shall, without any doubt, reform parliament. Our parliament needs to be liberated.

To my team members, we fought courageously and gracefully. We fought as a team, we won as a team. I will not tire, I am more energized, ready, and determined to boldly fight on.

To my comrade Hon. Ibbi Florence Ekwau, together, we represented our party and supporters who trusted us to be their torch-bearers because they know we inspire millions. Let us continue to focus our energies on offering leadership to millions of Ugandans that crave for change. That is our unwritten covenant with our party and supporters.

I wish to remind our opponents that our political contradictions- simple, serious or grave- as they may be, we should be mindful of Parliament rules, discipline and decorum.

FOR GOD AND MY COUNTRY