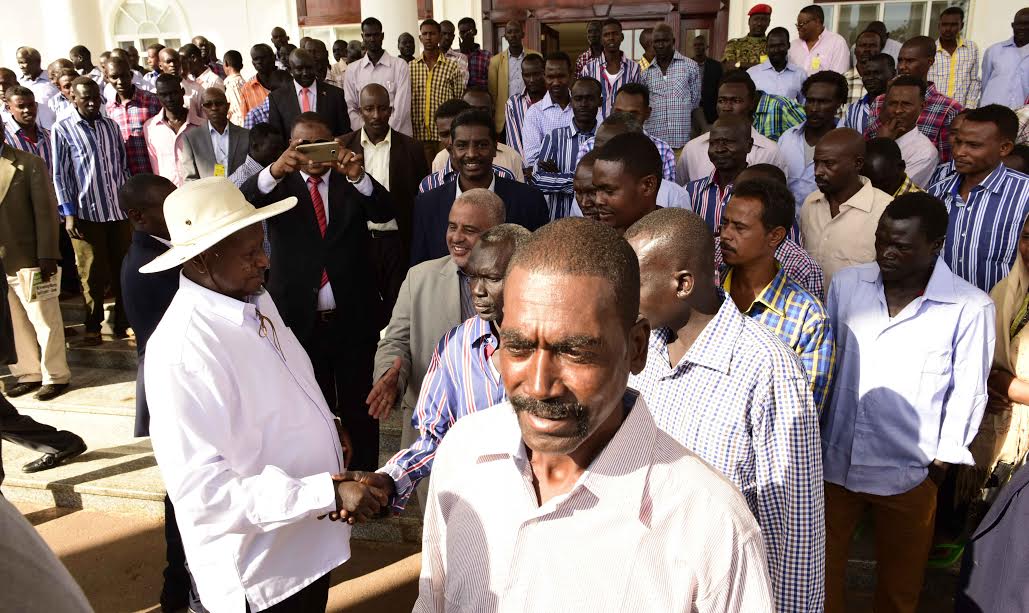 President Yoweri Museveni has overseen the safe handover of 125 Sudanese prisoners of war, to the Khartoum Government, who had been previously captured by the Sudan People’s Liberation Movement-North rebel fighters.

Speaking before the former captives and a high profile delegation at State House, Entebbe, yesterday, the President expressed gratitude to both the Government of Sudan (Khartoum) for accepting the prisoners of war and to the SPLM-North for exhibiting the peace gesture.

“There are certain governments that never allow receiving such prisoners of war but for this case, the government of General Bashir has,” President Museveni said.

Mr. commended the SPLM-North for not killing the captives. He said such acts of killing captives strengthen the enemy instead, because it discourages the others from surrendering.

“Why would you kill a soldier who is already injured? The fact that you say that you do not kill the prisoners of war, means Garang listened to my lessons,” Mr. Museveni added. The late John Garang was a Sudanese politician and leader, who, from 1983 to 2005, led the Sudan People’s Liberation Army/Movement SPLA/M) during the 2nd Sudanese Civil War. Following a peace agreement between the Khartoum-based Government of Sudan and the SPLA/M, Garang served briefly as the 1st Vice-President of Sudan from July 9th 2005 until he died in a helicopter crash on 30th July 2005.

The group of the former prisoners of war was released through Uganda because President Museveni was instrumental in negotiating for their freedom in an ongoing effort to usher in peace through engaging the Sudan Government (Khartoum), the SPLM-North, and the Darfur rebel fighters.

President Museveni said for the last 55 years, he has followed the events in the Sudan and this explains why he contacted the Khartoum government to provide help on the issue.

“Some months ago, I told General Omar al-Bashir that may be I could help him quietly with the issue of Sudan. I speak the truth, I am not a diplomat looking for Nobel Peace prize, and we need to be frank with these issues. This is a very good occasion where these young men are going to be reunited with their families again,” he observed.

According to the SPLM-North, they agreed to the release of all the prisoners of war under an operation code-named “Good Intentions” which the representative of the Sudan government, Tarig Sayed Ali, the Secretary General of Patriot Tribes affirmed that it was unconditional.

The released started arriving in Uganda last Thursday after being in captivity for 6 years. The former captives hailed President Museveni for their freedom urging him to continue with the Pan-African spirit to ensure that the entire African continent is peaceful.

“I want to thank God that we are now free after all those years. We will never forget this effort of the people of Uganda and President Museveni,” said Colonel Richard Abdalla, a former prisoner of war.

The Sudanese Ambassador to Uganda, Abdelbagi Hamdan Kabeir, said that they were thrilled and confident that President Museveni was personally following this matter.

The Sudan People’s Liberation Movement-NORTH (SPLM-N) is a banned political party and militant organization actively operating in the Republic of Sudan within the Blue Nile and South Kordofan states.

SPLM-N was formed primarily by South Sudanese, Sudan People’s Liberation Movement/Army, that remained in Sudan following the South Sudanese vote for independence in 2011. They have been engaged in violent conflicts with Sudanese army since 2011.