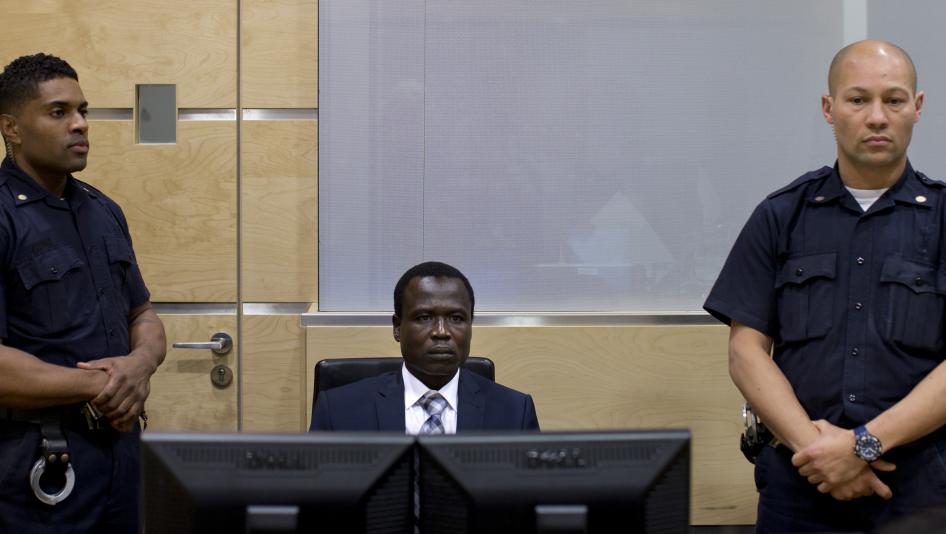 A former commander of the Lord’s Resistance Army (LRA) told the International Criminal Court (ICC) that Dominic Ongwen reported to his leader attacks on two camps for displaced people months after the attacks took place.

Witness P-205, who began testifying yesterday, told the court on Tuesday that Ongwen reported to the LRA leader, Joseph Kony, about the attacks on Odek and Lukodi three months after the events took place. The witness said Ongwen reported on the attacks using the radio of another commander, Ocan Laboingo. Ongwen and Laboingo were commanders in the same brigade, Sinia.

Ongwen is charged for his alleged role in the attacks on Odek and Lukodi. He is also charged for attacks on Abok and Pajule camps for people displaced by the conflict in northern Uganda. Other charges against Ongwen include forcibly marrying women, who were girls at the time, and committing sexual crimes against them. In total Ongwen faces 70 counts of war crimes and crimes against humanity.

On Tuesday, Witness P-205 said he was present when Ongwen called Kony to tell him about the attacks on Odek and Lukodi.

“He [Ongwen] sent his report using Ocan George’s radio call,” said the witness, using a term members of the LRA use when referring to a radio. He also used Laboingo’s other names to refer to him.

Later, trial lawyer Pubudu Sachithanandan asked Witness P-205 about orders in the LRA on abductions. The witness said the group’s leadership ordered a stop to the abductions of girls and boys in 2002 or 2003, but some commanders did not obey that order.

Witness P-205 told the court that before the order was revoked, abductions served two purposes in the LRA.

“If I use the example of 2002, prior to an operation [LRA leader Joseph] Kony convened everybody together. He then told us whoever didn’t have a wife was going to get a wife,” said the witness.

He said Kony told them that “each brigade should ensure they increase or they boost their number of soldiers,” by abducting boys.

Sachithanandan asked him why then abductions continued even after that order was revoked.

He said some commanders ordered their unit to carry out abductions, and those commanders would hide the abducted boys and girls from other units but then eventually they would report to their superiors what they had done.

Sachithanandan then asked him what happened next after boys had been abducted.

Witness P-205 said the boys are warned against trying to leave the LRA. He said they are told, “That this place where you have been brought to is for you to stay. Don’t try to escape or otherwise you will lose your life.”

Witness P-205 said after this warning the boys are then distributed to different members of the unit that captured them. He said this decision is made by the commanding officer of a battalion or the brigade commander.

Sachithanandan then asked Witness P-205 about boys under 15 years of age he had seen in the three battalions of Sinia brigade, namely Oka, Siba, and Terwanga. The witness told the court about the boys he remembered, who they were assigned to, and what their duties were.

The trial lawyer asked him about a boy called Kidega. Witness P-205 said he was 13 years when he was assigned to Ongwen.

“Kidega was the person who would carry Dominic Ongwen’s chair. He would carry the chair and follow Ongwen wherever he goes. If Ongwen would like to sit down, he gets the chair from Kidega,” the witness said. He said the boy later died during attacks government troops directed at Ongwen’s unit.

Sachithanandan also asked Witness P-205 about who in 2004 in the three battalions of Sinia brigade, namely Oka, Siba, and Terwanga, was assigned girls. The witness told the court about the commanders and other men he could remember.

“It looks like not everyone had wives, so at what age or level of maturity would one get a wife?” asked Sachithanandan.

“In terms of having a wife, once you are mature in your age, from 20 upwards, you are given a wife, if it is agreed that you be given a wife,” replied Witness P-205.

On Wednesday, Witness P-205 will be cross-examined by Ongwen’s defense lawyer.