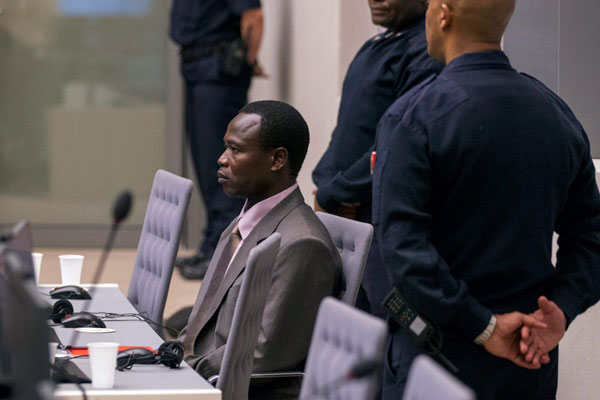 The International Criminal Court (ICC) heard for the first time witness testimony of the last moments of the deputy leader of the Lord’s Resistance Army (LRA), Vincent Otti, for whom there is an outstanding ICC arrest warrant.

Witness P-205, who was testifying for his third day before Trial Chamber IX, told the court he witnessed Otti, another LRA member called Otti Lagony, and someone the witness only knew as Okello being taken away to be shot.

The witness gave this account on Wednesday in the trial of Dominic Ongwen, a former LRA commander, who has been charged with 70 counts of war crimes and crimes against humanity.

Witness P-205 said Vincent Otti, Otti Lagony, and Okello were shot because “they were alleged to have been interested in escaping.” Witness P-205 did not say in open court when this shooting is alleged to have taken place. He said he was at the LRA headquarters at the time.

The witness said that around the time Vincent Otti was being arrested he was in Ri-Kwamba having been sent there to get food. Ri-Kwamba was one of the sites where LRA fighters had congregated once peace talks began between the LRA and the Ugandan government. These talks were mediated by the then autonomous government of South Sudan between 2006 and 2008. Ri-Kwamba is roughly in the border area between Congo, Uganda, and South Sudan.

“I was actually apprehended as well. I was beaten,” Witness P-205 told the court.

“I was beaten because they had alleged that Otti had already talked to me about escaping,” the witness said.

“For the killing of Otti Vincent, we heard the gunshots,” Witness P-205 said, explaining that Otti was not taken far away from the headquarters.

He told the court Otti Lagony and Okello were taken further away from the compound, so he did not hear them being shot. The witness said the only way he knew Okello and Otti Lagony were dead was because later they were absent without explanation.

The witness said those present at the headquarters were later convened and told, “Whoever was heard talking about what happened, the person would be punished.”

Wednesday’s testimony of Witness P-205 about the death of Vincent Otti may not be conclusive but raises the possibility the ICC will formally declare him dead. In December 2016, ICC Prosecutor Fatou Bensouda stated in her opening statement in the trial of Ongwen that Vincent Otti was dead. This was the first time the Office of the Prosecutor formally acknowledged that.

Vincent Otti’s death has been widely known for at least nine years, but the details of why he died have remained the subject of speculation.

In January 2008, the then chief mediator of the talks between the LRA and the Ugandan government, Riek Machar, was widely reported in the media to confirm the death of Vincent Otti. Machar at the time was the vice-president of the autonomous government of South Sudan. Before Machar made the statement, there had been speculation for months that Otti had been killed.

Earlier in the day, Witness P-205 explained to the court the reason he took a long time to escape from the LRA. In response to questions from defense lawyer Thomas Obhof, he said once the LRA abducted him he did not escape because of the threat to his village.

The witness said that before he was abducted others from his village who had been abducted escaped from the LRA in 1989.

“The LRA followed these people, came and abducted people, and killed 22 people [in the village],” Witness P-205 said. He told the court that after the 22 people were killed, elders of the village issued a warning to other villagers.

“So thereafter the elders pronounced when an individual is abducted they should bear it alone and not bring it to the village. Is that still your statement?” asked Obhof.

“Yes it is,” replied the witness.

Obhof also asked the witness about contact that Ongwen had with Lieutenant General Salim Saleh, a senior officer in the Ugandan military and a half-brother of President Yoweri Museveni. Witness P-205 said he was aware Ongwen made contact with Saleh in late 2002, but he did not why the two were in contact. He said he heard that Ongwen’s men received uniforms and money from Saleh, but he did not know what the purpose of these uniforms and money was.

Ongwen’s lawyers have pursued this line of questioning with two other witnesses before, but this is the first time that a witness has confirmed knowing about Ongwen’s contact with Saleh. The witnesses who have been asked about this are Witness P-403 and P-440.