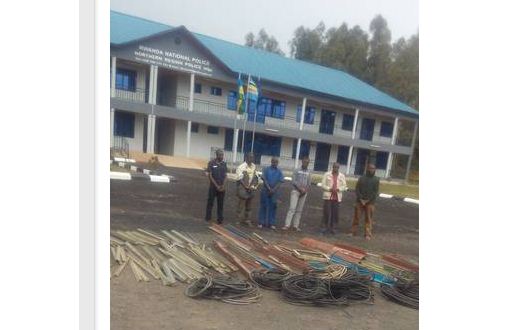 Police in Musanze District arrested six people on Tuesday in connection with vandalizing and stealing electric cables and transmission tower cross arms plugged off electric poles, with over Rwf31 million.

At the time of their arrest, they were found with 165 transmission tower cross arms, all in good shape, and over 200 meters of electric cables.

Stanley Nkubito, the head of Energy Efficiency and Revenue Protection at Energy Utility Corporation Limited (EUCL), said: “Normally stolen Transmission Tower Cross Arms are used in forming firm standing ground for heavy machineries, and it cost the government of money to repair the affected infrastructures, which in some cases cause power outage.”

“The theft of these electric materials undermines the government’s efforts to connect more Rwandans to the national grid and cost the taxpayer,” said Nkubito

It is said that the electronic equipment are stolen at night from houses and electric poles, and sold cheaply on the black market for blacksmith or as scraps.

“The effects of such malpractices are gross to an extent that they also put EUCL’s reputation at stake as well as losses; when electric materials are vandalized, it affects power supply and people’s businesses are affected, that’s why we urge the public to work closely with the police in ensuring such infrastructures are jealously protected,” Nkubito added.

The Northern Region police spokesperson, Inspector of Police (IP) Innocent Gasasira thanked residents who provided credible information that led to the recovery of the electric equipment and subsequent arrest.

He also warned against vandalizing public infrastructures and stealing of equipment.

“These infrastructures are meant to support community development and the country in general.  Vandalizing them means slowing down development, which we can’t allow,” said IP Gasasira.

Article 406 of the Rwandan penal code states that “any person who willfully destroys or damages in any way, in all or a part, buildings, bridges, dams, water pipes, water pipe routes, roads, railways or any other means of communication or electric power infrastructure, wells or any other buildings which do not belong to him or her, shall be liable to a term of imprisonment of two to five years and a fine of twice to ten times the value of the damaged property.”