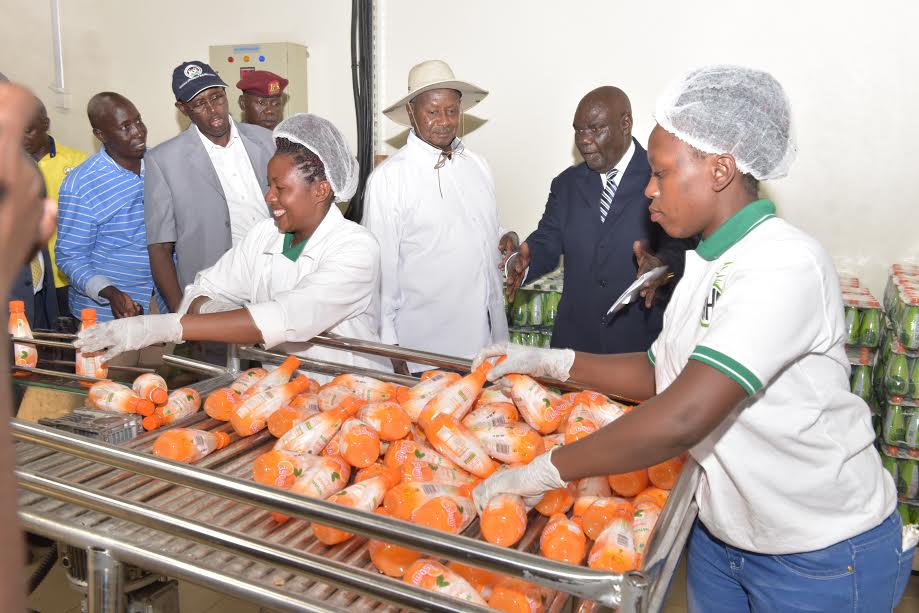 President Yoweri Museveni has urged Ugandans to engage in modern profit-oriented agriculture so as to get rid of household poverty. He noted that whereas Uganda continues to develop under the National Resistance Movement Government, the presence of poverty in the majority of the households in the country poses a big challenge.

Addressing hundreds of people at Citizens High School grounds in Kaberebere Town Council in Isingiro district in Ankole Sub-Region yesterday shortly after commissioning a newly built fruit processing factory in the town council, the President said that the government has laboured to provide the needed development infrastructure such as roads, electricity, water and essential services like health care, free education but defeating household poverty calls the input of the citizens.

The Shs.3 billion fruit factory that churns out 90,000 bottles of juice daily of 350 millilitres each from locally produced fruits is owned by Mbarara-based businessman Dr. Nathan Kalema, a former civil servant who is now involved in the private sector development.

Mr. Museveni said that government has not left the struggle against household poverty to citizens, the more reason it has overtime put in place programmes such as National Agricultural Advisory Services (NAADS) and Operation Wealth Creation (OWC) and supported agro-processing as a national policy.

“We are not leaving you alone in this struggle but you need to play your role. Government is providing you with quality seedlings and breeding stock. We continue to support investors in the agro-processing sector so as to guarantee you the local market for your produce and also seek regional and international markets. But you also need to do your part and produce for this market,” he said.

The President said that in the struggle for agricultural modernisation, the government has resolved to promote irrigation to mitigate the challenges associated with the changing climate that has resulted in long drought spells. He stressed that emphasis will be laid on the use of solar powered irrigation pumps which, he said, are cost effective. He revealed that government has already attracted an investor to manufacture solar-powered pumps locally to make them readily available at affordable charges to the citizens.

President Museveni commended businessman Dr. Nathan Kalema for being a pioneer in fruit juice processing in the area and also for being fore sighted as well as for supporting government efforts in finding market for the farmers through establishing the fruit processing facility. He pledged total government support to the factory to ensure its success.

Mr. Museveni assured Ugandans that peace and security is guaranteed in the country and that Ugandans are free to work in any part of the country without interruption.

“Peace and security is guaranteed and no one can interfere with our peace. That is why we are a host of more than 1.2 million refugees who are running away from trouble in their own countries and live here peacefully,” he said.

The President, however, cautioned Ugandans over the deadly Hepatitis B virus that has affected a number of citizens. He called on the people not to lead promiscuous lives. He said that although the government is ensuring universal immunisation of newly born babies against the virus, immunising adults is costly and quite demanding because it involved carrying out numerous tests before administering the immunisation. He, however, promised that government will do all it can to contain the virus.

Dr. Nathan Kalema, proprietor of the fruit-processing factory, hailed President Museveni and the National Resistance Movement Government for the good road network in the country. He observed that road network has made it easy for farmers to deliver their produce to processing facilities and to the markets.

He reported that his factory, which is yet to operate at full capacity, employs 106 people and receives fruits from hundreds of farmers from Isingiro district and the neighbouring districts in the Ankole Sub-Region. He disclosed that the factory has received fruit supplies worth Shs. 300 million shillings in the last three months. He said Uganda’s fruit juice is more desired abroad adding that he had already received enough orders from countries in the region and outside Africa as well.