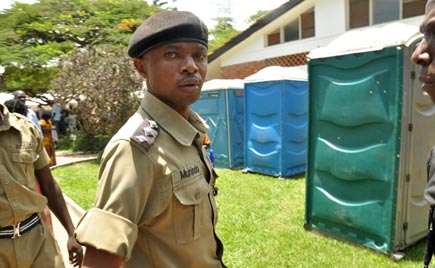 Assistant Superintendent of Police Moses Muhindo, the officer in charge of Nkozi Police Station in Mpigi District, is reported to have commanded and taken part in the beating up of journalists and destroying their cameras over.

He also says that he may not be able to go to work soon – even if he got better soon – since his camera has been held as an exhibit.

In response to the allegations, police has recalled Muhindo to Katonga region police headquarters and replaced him with AIP Ambrose Barigye as investigations start.

According to Mpigi district police commander Ahmed Kimera Sseguya:  “We [police] have to investigate intensively over his conduct. They [reporters] reported a case of damaging a camera and being beaten up.

“We shall not detain him as of now but he has been suspended from police duties until further notice.”