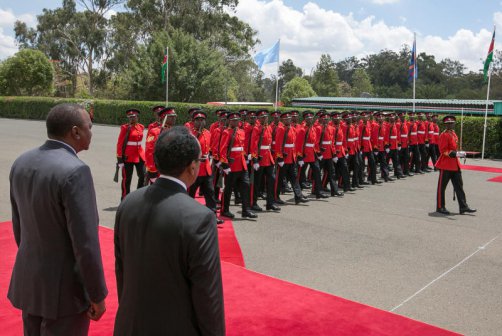 One of the key issues the two presidents agreed on is the launch direct flights between Nairobi and Mogadishu. The first of these flights is expected in a fortnight.

According to the two heads of state, Somali and Kenyan diplomatic and service passport holders will no longer require a visa to visit enter both countries.

The other key issue agreed on is the opening of the Mandera-Bulawayo and Dobley-Liboi borders to facilitate free movement of people and goods between the two countries.

But the meeting of the two heads-of-state did not yield fruit as regards the closure of Dadaab Refugee Camp, the largest in the world with over 400,000 refugees, majority from volatile Somalia

Kenya had scheduled to repatriate the refugees in May 2017. However, court has halted the repatriation.

“Kenya is committed to train, within our institutions and at Government cost, 200 teachers, 200 nurses and 100 Somali administrators. Indeed to support the enhancement of technical skills necessary for rehabilitation upon return of refugees, Kenya will establish a technical training institute for youths at the Dadaab Refugee Camp,” he said.

President Mohamed said. “This renewed cooperation between the two countries is necessary in combating threats posed by terrorists.”